Why can a new battery suddenly drop its charge?

I've been using my Lenovo A328 for less than a year, when its battery started suddenly dropping its charge from ~80% to 15%, then even to 3% and less and the phone switched off. I've now replaced the battery, but after several charge/discharge cycles it started to behave very similarly. Here's its typical charge history: 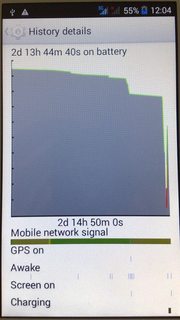 Since the battery has been replaced very recently, I conclude that it's not the battery's fault. But what else can be the reason? The phone lies in my pocket most of the time, and I occasionally take it to make some calls or use GPS or WiFi. It doesn't seem to be a heavy use, and even if it were, I'd expect battery meter to show a smoother charge curve.

Can it be an OS fault (but I did upgrade firmware to latest version, without any difference)? Or does my device need to be repaired?

There are three things at play :

I don't know what version of Android you are running but if I click 'Battery' and then the picture of the battery I can see exactly what has been using my battery. (I found leaving a dictionary application open even after pressing the power off button really drained the battery.)

Charging hardware could also be a problem. Are you sure it isn't your charger? (They do stop working.) Alternatively, is there a problem inside your phone?

Not the answer you're looking for? Browse other questions tagged battery-life or ask your own question.

0
“Battery Usage” page irrelevant
0
App showing battery charge based on its voltage
3
Tablet shuts down due to low battery when battery meter is above 10%
4
Android definition of charge cycle?
2
Battery capacity wear-down, and its relationship to charging practices
1
Change battery meter behavior
1
Is the battery cycle count stored on the battery or the device?