I am currently unable to order a Lyft or Uber on my Moto 360 2nd Gen. I've been using the watch for almost a month and have not yet found a way to order a car from the watch, despite seeing numerous references to a Lyft app on Wear.

Here's why I think there are Lyft and Uber apps for Wear:

Despite this, neither a Lyft or Uber app has appeared on my watch's launcher, and the "Call a Car" action in the Android Wear app is grayed out (not letting me choose an app); other actions work just fine with third-party apps. I'm in the US and have both Lyft and Uber installed and working on my paired Nexus 6P.

I contacted Lyft about Wear support, and they responded by saying, "At this time, Lyft doesn't work directly with Wear watches and the best way to still interact would be with a Smartphone at this time."

I contacted Uber as well, and they responded by saying, "Unfortunately, Uber is accessible in app form only through Android mobile device, iPhone and Windows Phone 8 and 8.1 at this time."

Both responses are at least slightly inaccurate (I know that Uber works on the Apple Watch and Pebble Time watch, Lyft works on Apple Watch and should work on my Wear watch), so I was left even more confused.

I also contacted Android Wear support via Twitter, they suggested that the "Call a car" action being grayed out was a bug and had me submit feedback through the app (to no avail even after 3 Wear companion app updates).

I also tried deleting and reinstalling Lyft, as well as restarting my watch and phone a few times, all to no avail.

The "Call a car" action (where I believe Lyft should be appearing) is grayed out and nothing happens when I tap on it: 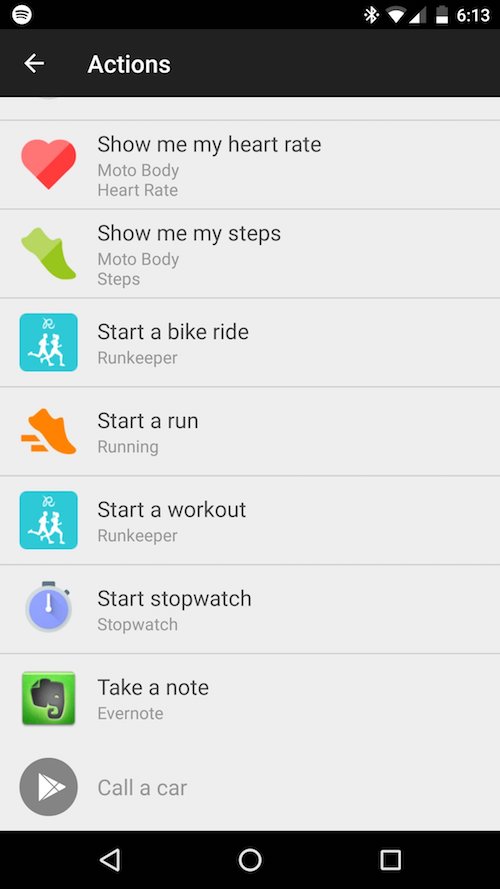 I can suggest sideloading the Lyft app. Earlier versions of Lyft had Android Wear support, but it was later removed (for some reason).

Here's how to get Lyft on Android Wear watches:

Note 1: The Lyft app will appear on your watch's launcher as well. For me, it didn't work initially (it crashed on launch for a few hours), but now I can order a car from that app as well, giving (me at least) two ways to order a Lyft from your watch.

Note 2: I'll be sending an email to Lyft asking them to add Wear support back to the latest version of the Lyft app.

Not the answer you're looking for? Browse other questions tagged android-wear or ask your own question.