I have a Samsung tablet running Android 5.0.2. Since roughly the new year it has been reporting a system update available. It took me a few days to clear off the 270MB its asking for, but I've done so. However, when I try to update it through About device -> Software Updates, it reports failure due to my network not having Internet access. 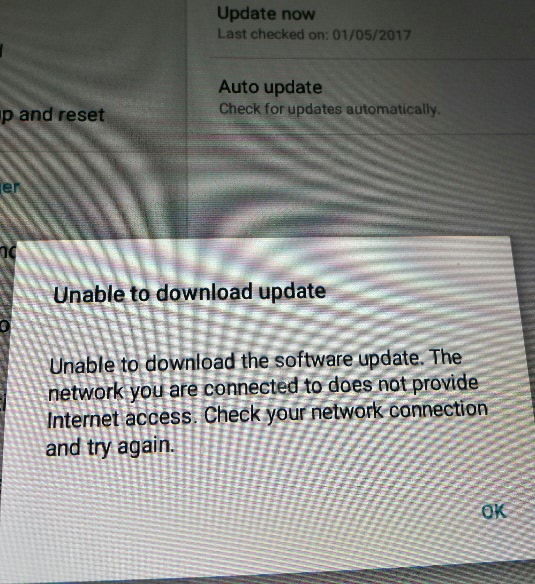 I'm typing this on the tablet right now, and I assure you I'm not using elfin magic to move the bits to the SE server. Clearly its Internet access is just fine.

Has anyone else seen this before and / or know what's going on here?

Browse other questions tagged wi-fi 5.0-lollipop updates samsung or ask your own question.

2
Android “Tethered” update mechanism
4
Allowing a computer to connect to wifi from android already connected to wifi. A unique situation
0
About Android Device Manager
5
Can my phone act as WiFi Access Point while Disabling Celluar Radio?
3
How to prevent Google from asking for location permission when enabling GPS?
1
What is KingoRoot error code 0x15F6D5?