My Phone Time-Travelled Again. How? and Why?

Yesterday night after a low battery alert I had a Whatsapp unread notification from my friend. I opened the message and found that I had a unread message from him which I remembered reading in morning.

Then I observed that I was missing my conversation with him from that time onwards till I noticed this. I also observed that that all Personal/Group Chats were also missing the entire duration's chats.

I thought maybe Whatsapp had reverted to an Old Message backup. But then I found that Firefox was missing 12-15 hours worth of browsing history.

I had also observed that the SMS which I received from the bank in the evening had disappeared. As well Google Play Store re-updated two applications which it had already updated in the evening. I had also lost some Photographs which I took with my phone in the evening. Call History is also missing for the day.

Google Now showed it was last updated 20 Hours ago.

From all this it looks like my phone Time-Travelled from morning to night.

QUESTION: Aside from Time-Travelling. How is this even technically possible for the Entire phone to rollback its memory/state/data to some previous time.

I think I had noticed this behavior few months back also, when I lost some Whatsapp chats but that time I thought it must be a Whatsapp bug and did not investigate.

My phone automatically restarted. (As if it just time-travelled and entered current time).

Restart Vibration made me alert for expecting this scenario. As soon as the phone started, I switched the phone to Airplane Mode to prevent Time-Line contamination

This Time I am observing the following:

If additional Info is required please inform. I will try to get it before I turn off Airplane Mode

It restarted just now and the battery graph is missing two blocks of time. Whatsapp messages are missing as well. 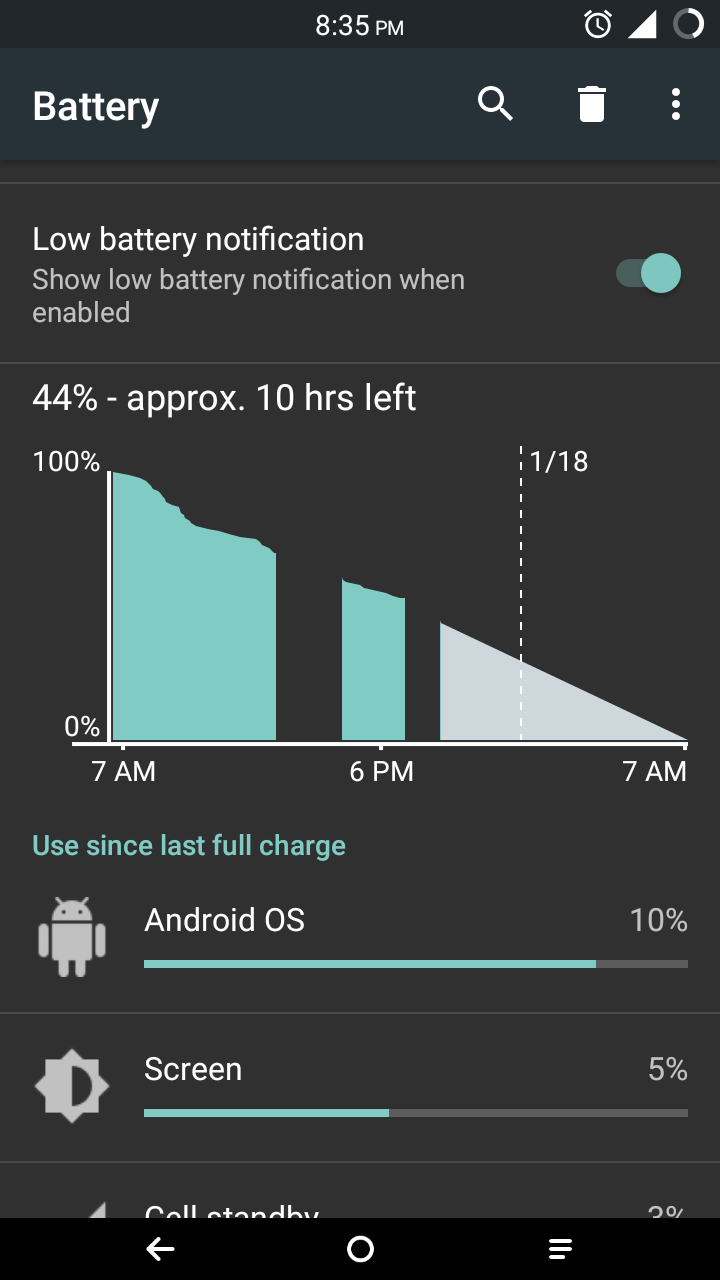 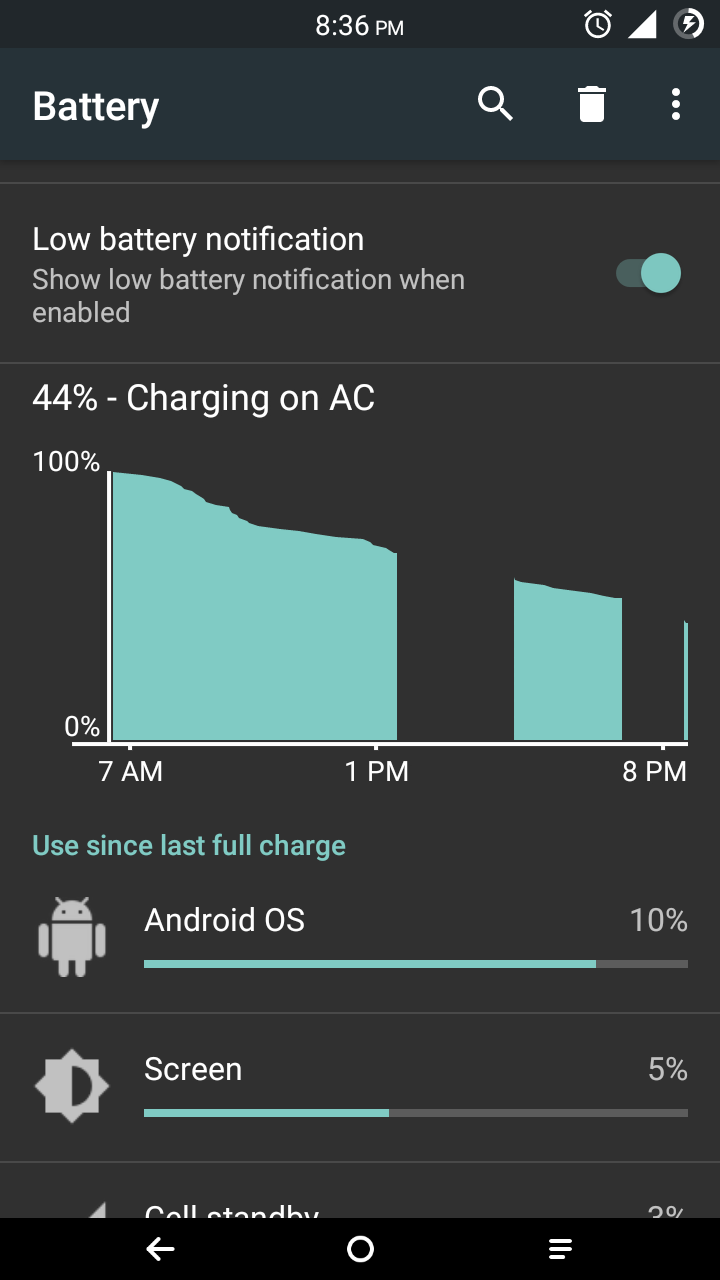 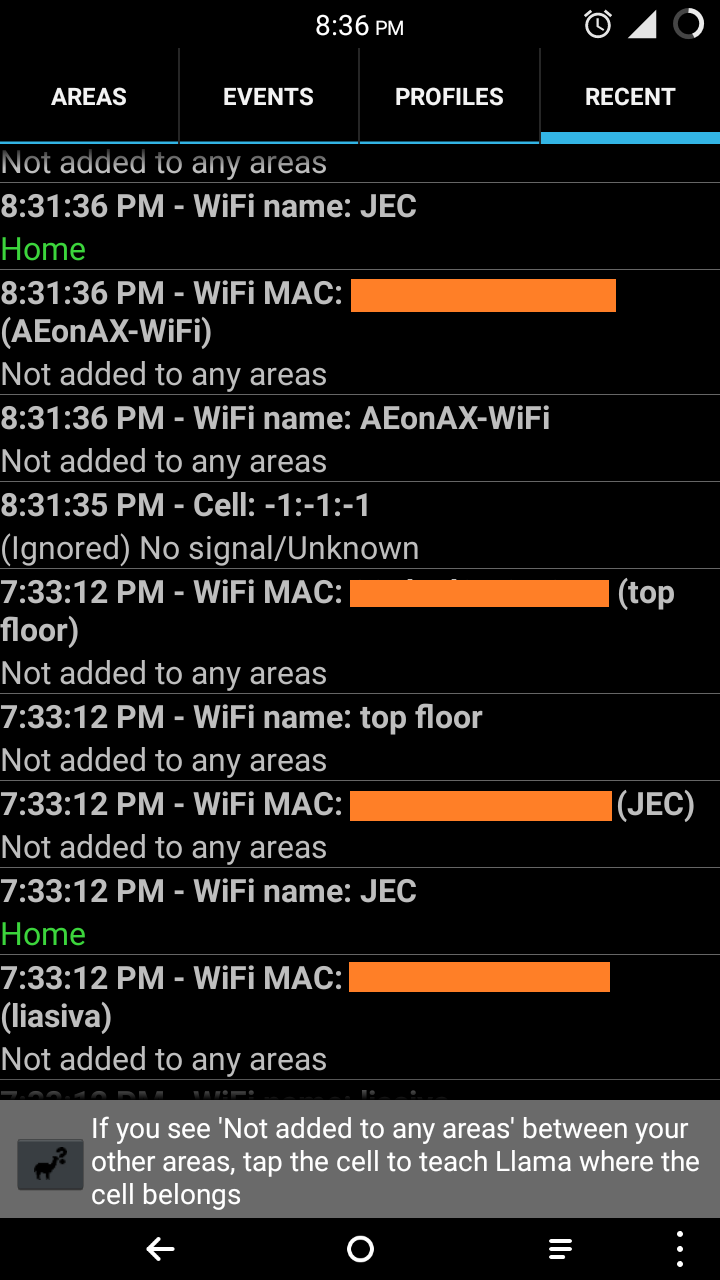 I thought I was the only one facing this issue, and I didn't even know how to describe my problem back then. Looks like we're on the same boat. Even I'm using the Moto G (XT1033), but on NXROM 10.2, and I started facing this issue around a year ago until last December. The phone randomly reboots when I'm using it, and as you had described, it went back in time, and all the messages, downloaded files, statictics for a period of time and other stuff just vanished. I tried to Google this up, and here is my understanding (I may be wrong, so please correct me if so):

It turns out that this happens due to a kernel panic, and when the fsync function is not executed. fsync is responsible for writing the data from the buffers (all changes you make to data, like new messages, photos etc. is stored temporarily here) to the internal storage. When a kernel panic occurs, all the data in the buffer is not moved to the internal storage, but just vanishes. So all those changes you made just vanishes into thin air.

I was pretty frustrated about this, and then I stumbled upon LSpeed (available on Play Store). There was a battery profile which emphasises on conserving battery life. It disables kernel panic, and modifies a whole lot of other settings. Since I installed that, I've not faced this issue again. Try this out and do let me know how it works out for you.

There is a reason to worry 'cause I see no reasons for normal good-willing applications to do so. Try to check your phone using some anti-virus program and clean up all applications you don't obviously installed.

Not the answer you're looking for? Browse other questions tagged 6.0-marshmallow internal-storage motorola-moto-g ram or ask your own question.

0
Application self uninstalls
5
Android 6.0 drains my Nexus 5 battery within an hour
2
Battery Issue with Android 6.0
1
Google Account Sync, high battery usage of Google Play Services
19
Home Screen and Recent Apps buttons don't work
0
Restore app data from 4.x in 6.x
7
Is there a way (with root?) to prevent Android task killer from killing certain apps?
4
How do I stop my device from sending my location to Google every second, even when the location setting is off?
0
How to prevent WhatsApp (Web) from losing received media?