How to update rooted HTC Incredible

I rooted my HTC Incredible a few months ago by following a tutorial. My phone downloaded an OTA update and is asking to update. I would like to update and remain rooted. How do I go about doing this?

I removed a few bloatware apps. I couldn't tell you which ones, though.

First of all, since you've modified the system, the OTA update could very well fail partway through -- most of those are distributed as patches against the existing binaries.

However, if you want to go the hard way, keeping root (or at least the ability to re-root easily) is easy provided your Incredible is NAND unlocked (aka S-OFF). Recent versions of Unrevoked do this automatically, but depending on where you downloaded from and when could affect that.

To check if you're S-OFF, reboot into the bootloader (aka HBOOT). To do that, power off the phone, then hold down the volume down button and power it up. Keep the Vol Dn button held until you get a screen like the following: 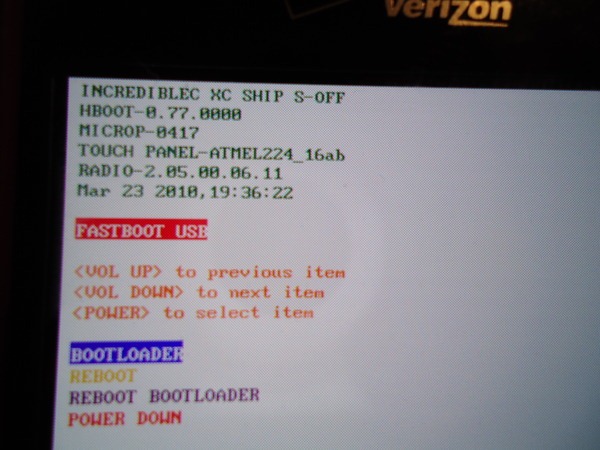 You can also see the notification that it has S-OFF at the top of the screen. That's what you want to see. If that's missing (or says S-ON), then you don't have S-OFF. If you're not, get the latest Unrevoked Forever.

Once that's done, you can flash whatever you want and still be able to reroot easily by simply flashing your recovery of choice (often ClockworkMod) from HBOOT and then reflashing a root/superuser package from recovery.

Not the answer you're looking for? Browse other questions tagged 2.2-froyo updates root-access ota-update or ask your own question.