Is there a way to easily record a phone conversation in-progress?

I do not own an Android device. I was thinking about getting one, and an important feature for me is the ability to record a phone conversation which is in progress - meaning, while I am in the middle of a conversation, I could touch a button which will save a two-sided audio recording of that conversation from the moment onward.

I am aware that recording a conversation I am participating in without notifying the other members is illegal in some places - I have already checked this and have verified that it is completely legal in my country.

Is there is such a functionality in Android, through core features or available applications?

There are a couple of apps to try. I use Ultimate Voice Recorder which costs $4.99 but works beautifully. You can start recording in the middle of a call.

A quick search on AppBrain brought up Record My Call which is free. I haven't used Record My Call so I can't comment on whether or not it can start in the middle of a call.

Update: Ultimate Voice Recorder does record both sides of the conversation.

Tasker can do this for you no problems. In fact, it's listed on the home page as a particular use case:

Yes, it is possible to record phone calls using Google Voice (but only calls that you receive).

Another thing to try, download Voice Recorder from market. Turn on speakerphone during call with voice recorder running and recording in the background. That will at least record you, not sure if it will work for the other party, but might while on speakerphone.

This is really an answer to How can I record phone calls on Motorola Atrix 4G? marked as a duplicate even though it's not but it also applies to here.

If you need a call recording feature you better watch out and try before you buy. Some device manufacturers will cripple the base software on their phones most likely due to reasons imposed by the BS hypocritical legislation in countries they operate. You can then install any call recording app you like and it may just not work because of that not because it's buggy (people don't know that and leave bad reviews).

The way they do it varies. Nokia used to inject bleeps in my Symbian phone, it was a pain to find software that would circumvent that. Motorola in their Android Atrix phone went step further and apparently modified the core libraries so that recording is not possible at all.

Sometimes there are ways around it if you are stuck with the current phone. For example, there is Now Blast 2.3.5 ROM available for the aforementioned Motorola Atrix on the XDA developers webisite that originates from China. But still replacing the software is not an easy task if you are new to it. It costed me a night to learn the ropes, the lingo and fix this BS, and only this much long thanks to the support from other people who wrote the tools, guides etc. It also carriers the risk of making the phone unusable.

Here are my results: 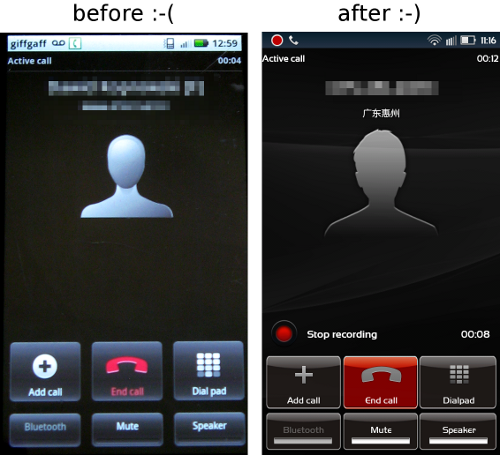 UPDATE: Nevermind. Found it and it has terrible reviews.

Total Recall. It's pricey ($10) and it doesn't appear to be in the app market but I like how it integrates with Evernote and you can always sideload.

I think this app has plenty of configurations to try in case it doesn't work:

It also has options for rooted devices, in case all failed.

2
How can I record phone calls on Motorola Atrix 4G?
3
Any voice recorder app for Nexus S?
1
Call recording app
0
Which Android handsets support in-line call recording?
1
How do I record all my phone calls?
4
Call Recorder not using microphone to record the other side
3
How do I record calls on Viber, Skype, Whatsapp, Voxer, Google, Facebook, etc?
1
How do I increase audio sound on my app for recording phone calls?
1
How can I keep track of all types of contact interactions in one place?

24
How can I play audio over an open phone conversation?
0
CM10.1 now cannot record any inbound audio on phone calls
3
Is there a method to record video chat app (Google Duo, Skype, Tango, etc.) straight to the phone?
0
Is there a way to forward online calls to cell network?
1
Phone Call Recording Apps Only Record One Side Of The Conversation
1
Is there a way to block incoming calls from specific phone numbers?