I signed into my gmail on my boyfriends phone once quite a bit ago ,few months and all of a sudden yesterday was getting notifications on my phone asking if I was trying to sign in cause he kept getting notifications that action was required for his and my account, so I told him to leave till we could have both phones together to see what was happening and when we click on his email if you touch the drop down arrow it shows mine too we have tried everything to remove if from his google account so my email will not be accessible on his phone but when we click on mine and manage accounts its takes mine to the page where u can sync everything and if I click all the syncing boxes all my email come up on his phone how can I get my account off his phone please help ??? how do I take my gmail off his phone if it doesn't sync properly and give me the option to remove my account

Under Accounts in your boyfriend's phone's system settings, there are probably two instances of Google. This may look different depending on your exact version of Android, but something like this (but with two instances).
Click the images for larger versions. 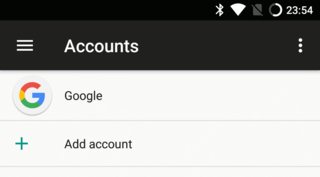 Unless the caption for each account tells you which is which, you'll need to open them to find that out. Once you've found the right one, there should be an option to remove the account. On my Samsung Galaxy S5 running LineageOS 14.1 it looks like this after I click the three dot menu at the top right. 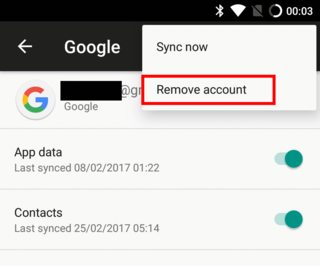 And on my Honor 8 running stock EMUI 4.1 it looks like this (the language is set to Swedish on this one, but you get the idea). 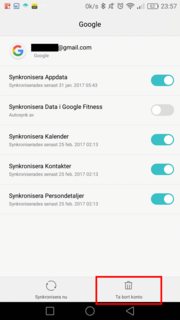 The red rectangles were added by me, to indicate where the option is found. Unfortunately I don't have a phone with Samsung's stock rom at hand, so I can't show exactly how it should look on the S4 or the S6.

Once you've deleted the account, the phone should forget about it, and concequently stop logging in to it and syncing with it. It only deletes the account from the phone, not from Google's servers, so you won't lose anything.

If the above doesn't work, then something is wrong. A last resort is a factory reset.

Not the answer you're looking for? Browse other questions tagged samsung gmail or ask your own question.

4
Is it possible to remove an account from the Gmail app but keep the account on the phone?
8
How can I set up my Google account without syncing Gmail?
12
How to prevent android from auto-sync'ing gmail contacts and photos etc
0
gmail won't sync to my phone
4
Removing Gmail account from Gmail app, but keeping it in Google Inbox app
1
Do not show GMAIL account in gmail
0
Gmail not automatically syncing