Phone keeps turning on and back off. What do I do?

This morning, I turned on my mobile, which had been fully charged during the night. It displayed the usual white «Samsung Galaxy SIII Neo powered by android» thing, but then it vanished, then it reappeared, and it has been doing this throughout the day, for all I know. I tried googling, and found out about:

Removing the battery won't do anything: I tried that several times, but as soon as I put it back, it goes back to doing the above. Also, connecting to the charger makes the «Samsung Galaxy [etc]» display like 2 or 3 times longer.

What should I do about this? What is wrong with my phone?

Following @MatthewRead's comment, I tried Vol-,Power,Home. Something flashed on the screen, and then back to on-off-on-off. This is a frame of a short movie I captured with another mobile: 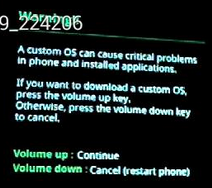 Sorry for the name of the movie showing up and hiding «Warning». I just tried Vol+ as that screen suggests, and now the screen shows up no more. One thing is sure: holding down that combination now stops it from on-off-on-off-ing, but as soon as I release, we're back there.

I tried other key combinations, and this is what I found out:

The last two have not always happened, but maybe I thought I was pressing when I actually wasn't. The screen says to hit Vol+ or Vol-, but none of those does anything.

Someone suggested I scrape the battery contacts, I did it, and now the mobile seems to be working again. So this apparently saved me the trouble of flashing, though I have the firmware downloaded in case something goes wrong.

From Experience : The problem is with your battery. The battery can't produce stable power.

When you go to recovery mode, the power consumption is very low. So, it will stay for some time.

When you turn on the phone, the brand logo is shown, may or may not the Booting is done. Suddenly the phone turns off. Then again turns on and repeat this automatically about 15-20 times.

I have the same issue and after checking for a weak , I found that the battery can't produce the power in a stable manner.

The bootloop happens when the boot partition is corrupted or in extreme cases the whole eMMC chip is damaged, the phone boots but can't load the system and all ressources.

Among the causes a defective charger - as you've pointed the phone was left to charge all night long.

Try flashing the phone, this may solve the bootloop.

Let us know if you experience any errors. We'll try to help.

PS: All your personal data will be wiped.

Not the answer you're looking for? Browse other questions tagged samsung-galaxy-s-3 recovery-mode reboot or ask your own question.