Is there a way to make Android/a Galaxy S7 prompt Win 7 to install the drivers for MTP?

I own two S7 I use for work, one I've had for a while and used it to develop Android apps, the second I got a week ago and set it up today. Both I updated to Nougat 7.0 today (they were both on 6.0 with different Builds) and my old one instantly made Windows install the drivers for MTP and PTP but the new one only did it for PTP. I can still access everything on it with MTP but Eclipse/Android Studio/adb devices don't see it with that.

I tried killing the adb server, unplugging, restarting, changing the setting to PTP and back,... but nothing has worked so far.

The devloper mode and USB debugging are enabled on both S7s and I also updated the Google USB driver and installed the Android 7.0 SDK Platform through the Android SDK Manager today. The latest version of Kies is installed too but it also can't see the new S7 in MTP mode (to be honest, didn't test with PTP mode).

So, is there a way to kind of reset the whole MTP deal on the new S7 (preferebly without resetting the phone), so it makes Win 7 look for drivers again?

Bonus question: Can I make Nougat's developer settings' USB debugging default to PTP? Every time I unplug the phone, Android sets it back to MTP. 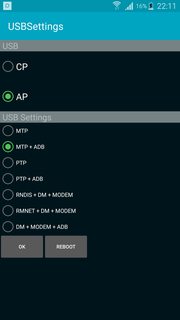 Can I make Nougat's developer settings' USB debugging default to PTP? Every time I unplug the phone, Android sets it back to MTP.

Your phone should remember this setting and never forget again :D 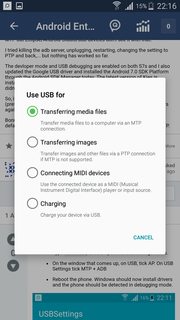 Also try revoking the USB debugging authorizations in the Developer options. Works fine in most time.

Not the answer you're looking for? Browse other questions tagged windows 7.0-nougat samsung-galaxy-s7 .

2
Substitute Win7 USB drivers for ADB mode
3
Samsung Galaxy Tab 7" Plus -- adb drivers
13
How do I get my Nexus 7 to show up in the adb devices list?
1
Moto G in to USB Debugging mode issues on Windows 7
22
How to install ADB drivers on Windows 10 (OPO)
1
How to connect a Nexus 6p to Windows 8.1 in MTP mode
1
Can't connect/get computer to recognize OnePlus One
1
Oneplus One is not recognised at all by Windows 10
4
ADB not finding device with Galaxy S8 and Windows 7