Update Nexus 7 to a Nougat ROM

I have an old Nexus 7 (picked up from I/O 2012) that got unbearably slow after an OTA upgrade to Android 5. After seeing hints from early adopters that Nougat is serviceable on this device, I decided to give it a whirl by following these instructions:

Here are the files I used:

The device booted up and began the setup wizard, but as soon as I tapped an option to either set up a new account or copy data from an existing one, I got the error: 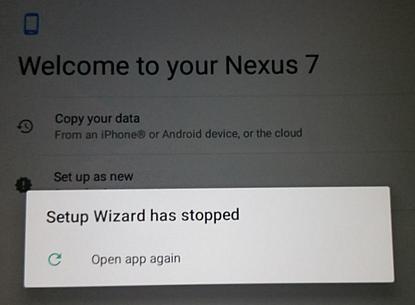 and on repeated attempts: 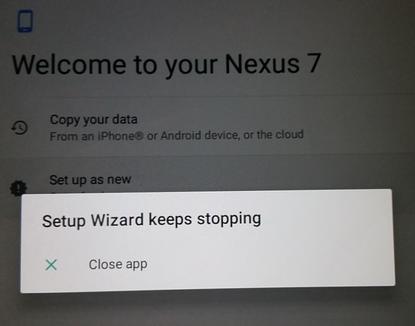 After some more research, the consensus seems to be it's a permissions issue with blame ostensibly pointing to the CyanogenMod (presumably now LineageOS) team. I tried a few suggestions below, but I could use some help on how to proceed.

I came here because I didn't want to get too far ahead of myself before getting a second opinion. I tried to document the steps taken so far as thoroughly as possible (as well in part to help others, since the documentation out there in the wild for all this is a bit scattered and confusing). I'm hoping this is just a case of me having missed a small detail in the procedure that someone can point out.

I've done many flash attempts and at the advice of folks here and elsewhere I more recently switched to using:

I was able to bypass the Setup Wizard - by using either the build.prop tip Andy Yan pointed me to, or the four-corner tapping trick Nadav Tasher suggested in his answer. However I'm still having problems with apps stopping (even those from the Play store). Presently working on identifying and granting missing permissions.

By way of example, while troubleshooting I found com.google.android.setupwizard was missing these requested permissions:

I was able to grant all of them except the last one, but didn't manage to get the wizard to restart afterward so gave up on that (particularly after being told it wasn't that important anyway).

Haven't gotten a chance to do similar analysis on any other apps - and not that inclined to. I feel like if things were working right I shouldn't have to be doing this, and am hoping someone can suggest a better way (e.g. a LineageOS tweak or maybe a different GApps?).

Had this problem a couple days ago. Solved it by bypassing the SetupWizard. Steps to skip:

Repeat this until the SetupWizard skips.

The GAPPS is outdated. Android 7.1.2 introduced changes to the Setup Wizard that will break it for older versions. Use the actively maintained OpenGAPPS instead, with the added benefit of choosing the version (mini, micro, nano, etc.) you want, and also make /system less occupied. Just wipe everything in TWRP and start from where you sideload the ROM and GAPPS.

Also, just a hint: AOSP is clean but lacks features. If you want to fiddle with more customization, there are plenty of choices out there (e.g. LineageOS). You also likely won't need to deal with SuperSU if you flash them, as they have built-in SU management.

Not the answer you're looking for? Browse other questions tagged nexus-7 terminal 7.1-nougat setup-wizard .