Today, for the first time ever, I've gotten this notification. It appeared sometime while I was using the Dolphin browser app.

XDA forum thread seems inconclusive. Some say it's an app that you have to install (obviously I've never installed this app), others say it's a part of Samsungs firmware.

Although I haven't been able to confirm this, this seems to be an official Android or Google Play notification. I've clicked the uninstall button and the (Samsung's pre-installed) app 'Mobile tracker' has been removed from the applications list.

I faced the same notification on my Galaxy S 3 yesterday. It prompted me to uninstall it as the app can be used to spy on me. Here is a picture of the pop up: 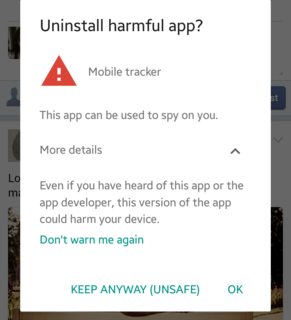 I clicked on the OK button and hope that no malware has infiltrated the phone this way.

I have got S3 i9300, I got this message too. The message was from Google appstore app. I could disable it. But couldn't remove it.

Not the answer you're looking for? Browse other questions tagged 4.4-kitkat notifications or ask your own question.

6
I am getting the notification: Disable harmful app. On disabling it, I am still getting back the notification. What do I do?
0
No Signal Sign on Samsung S3 GT-I9300 Possibly After Deactivating Mobile Tracker