the app crashes after ~ 15 minutes. It happens with no dialog box, it returns to desktop screen.

What could cause such a bug? How to solve this?

The issue of applications constantly crashing in Android Lollipop may be attributed to bugs in this Android version or other reasons which are described below:

This bug is described by a user on this thread: Why are my music player apps crashing frequently since recent Android update.

This is an inherent flaw in Lollipop where apps crash constantly. You notice this with music apps as audio stops. Some apps stop restart where they left off, others don’t. With this bug when the app crashes, the audio just cuts out, there is no on-screen error message.

In addition, more information about this bug is revealed through an error logging of different audio apps by one user, and it produced this error:

With some possible reasoning that;

this exception handling may have been broken across audio apps in Android Lollipop, or possibly an overly aggressive process causing this exception in other apps

It is possible that with many applications running in the background, the system resource tends to become overconsumed by RAM and CPU hungry processes such as social media apps etc.

In this case the inbuilt task manager in Samsung devices tend to kill such processes unless explicitly turned off in Smart Manager settings to conserve power and memory to cores apps (known system apps to me include media scanner and DRM content storage –consume a lot of resources when apps accessing related media are in use).

That is, I why I think it’s a possible cause although certain android versions have more pronounced effects than others, possibly due to poor memory management in a certain Android version.

This component was also held responsible for causing app crashes due to a buggy update. Many apps using the feature (typically those rendering webpages internally) could also crash. Newer versions are based on chromium however. So uninstalling the buggy update could save app crashes.

This is not the whole list of bugs causing application crashes in Lollipop, but there may be more but with respect to the question I found these reasons to be more closely related to the issue in question.

If this is futile, then more advanced operations are required.

@xavier_fakrat's useful answer provides many potential reasons that could have caused the crash. After more investigation, here is what caused the crashes: the Android app optimisation feature, that can be found in Settings > Battery > Optimisation.

The solution for me was to disable optimisation for Whatsapp and music player apps. 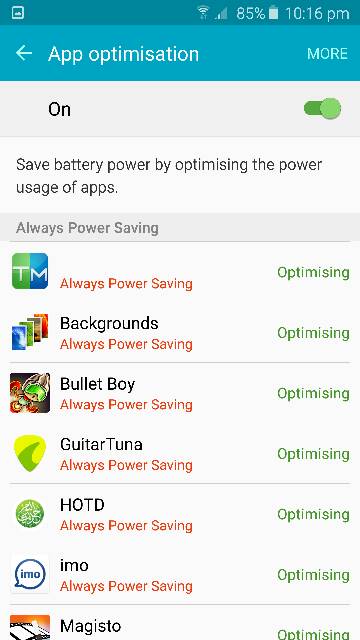 Not the answer you're looking for? Browse other questions tagged 5.0-lollipop audio crashes or ask your own question.