Why do the system sounds keep turning on?

Whenever I record with the voice recorder app on my Galaxy S5, the "system" sounds turn on— that is, the bloop sound whenever I click on something, the typewriter sounds when I type, the lock-click sound when the phone unlocks, etc. I would rather these sounds stay off permanently, and am tired of having to keep turning them off in settings. How can I get these sounds to stay off?

I believe this somewhat have effects on system sounds, as volume is auto-controlled by the system to suit the specific environment.

Additionally the Samsung Galaxy S5 has 2 microphones. As explained from this article: https://forum.xda-developers.com/galaxy-s5/help/microphone-problem-t2807110

The secondary microphone is used for active (ambient) noise cancellation. This can be weighted as well when recording audio. Normal mode uses both mics omnidirectionally. Interview mode uses the secondary mic only in a directional beam pattern. And conversational mode takes directional top and bottom audio.

Your issue could be caused by a number of things from poor audio quality, poorly chosen presets or an obstructed microphone triggering volume to up.

As a possible fix try adjusting the Samsung "wise voice" feature that adds microphone gain to compensate audio recorded from a distant place or tweak the notifications or sound mode settings or perhaps automation to auto-off sounds when recording (e.g using Tasker): 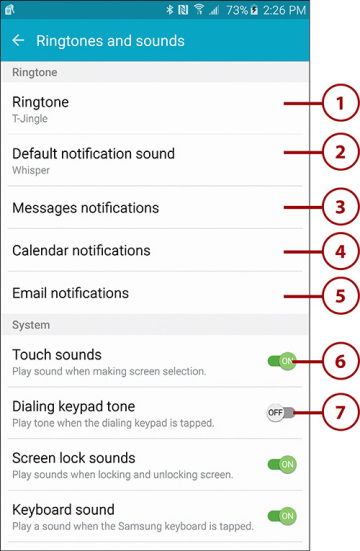 Not the answer you're looking for? Browse other questions tagged audio samsung-galaxy-s-5 or ask your own question.

1
Froyo Sound Management
5
How to suppress repeated alert/notification sounds
1
How can I keep screen on ONLY while music is playing?