Is there any relation between processor clock speed and heating effects?

I'm planning to buy a new android smartphone, and I've heard that while high processor clock speeds are good, they are also accompanied by high heating effects.

Is there a way I can obtain the heat (in watt possibly) and the clock speed (in GHz) of the processor?

(I'm quite new here, and I'm not really a very informed person when it comes to anything digital technology).

For detailed CPU information (e.g clock speed, cpu frequency etc) you may use CPU-Z to get that kind of information.

All of these manufacturers make SoCs with segmentation in mind i.e cost performance etc

So how do manufacturers improve power-effeciency while improving performance?

CPU designers employ a variety of ways to accomplish this:

Overally what this means is that that by lowering the clock frequency the power consumption is also lowered,

Although modern CPUs have various methods to minimise overheating, sometimes it depends on how the device is being used, gaming etc, so it partly depends on user's end 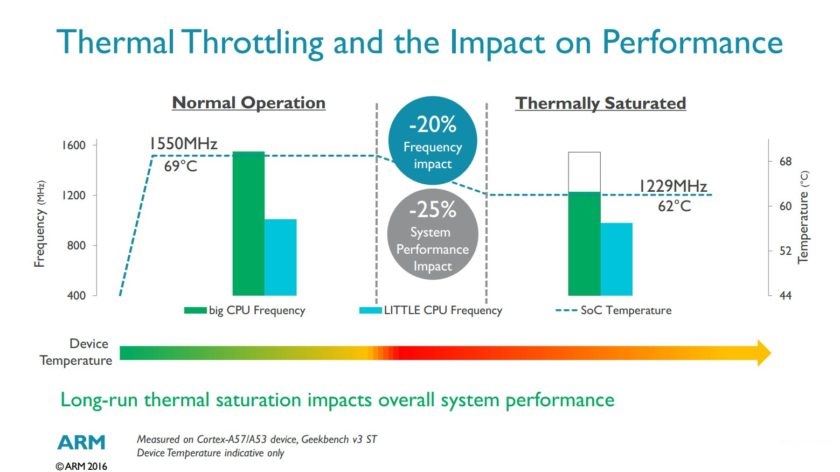 A core is a processing unit within a CPU. Each one can handle tasks independently, or can be combined to provide more power to particularly intensive tasks.

The clock speed measures, in gigahertz, the speed at which a CPU is able to process instructions. While it is tempting to think a more GHz equals better performance its certainly not the case.

A 3 GHz processor is faster than a 2GHz processor only when it’s running an app that takes advantage of its abilities or when you’re multitasking.

There is some disparity when trying to compare these directly (e.g Exynos 7 Octa is vastly different from the Snapdragon 805 in terms of architecture. Compared to the quad core architecture of the 805, the Exynos 7 Octa comes with two sets of quad ARM Cortex A53 and Cortex A57 cores on board, with CPU loads alternating between the two, or utilizing them completely depending on the computing power required)

Not the answer you're looking for? Browse other questions tagged overheating processor clock-speed .

25
How do RAM and processor speed affect overall performance on Android?
0
Is there any way to give phone rating according to its ram and processor data ? except benchmarks