After the launcher seemingly bugged out on my old faithful LG E980 (5.1.1 Lollipop) yesterday my phone has been unresponsive and acting very strange. To begin with I hadn't dropped my phone or had anything out of the ordinary happen to it. But when I unlocked it for the first time in the day after unplugging it, the display went straight to multitasking rather than the home screen. When I tried to escape it a dialog popped up asking which launcher I would like to use (with the "Just once" or "Always" options).

After selecting Nova Launcher the home screen appeared with only some of the apps and widgets visible, completely unresponsive. So I rebooted it, and since then the phone will only display (apart from completely normal boot animations) the power menu, if I press the power button in the right way. Or, if I fiddle with the buttons, position it in a certain way, cover the camera or the microphone, I'm not quite sure what triggers it, the screen will display what appears to be an aerial image of a coastline for a moment before going black again. 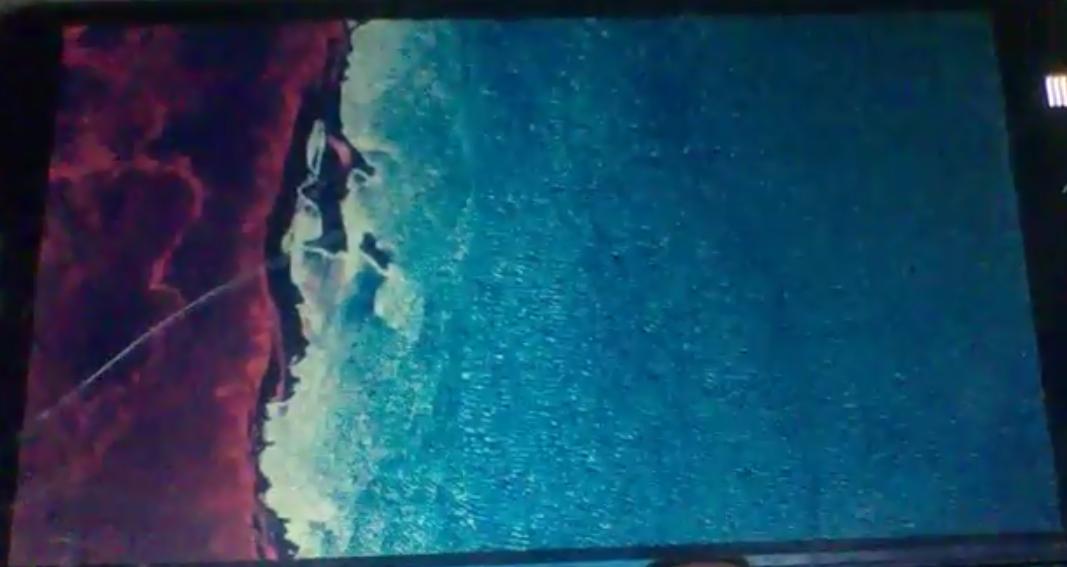 (In the video all I'm doing is repeatedly pressing the power button. Sometimes the image will fade on and off repeatedly, but usually it will only display once, and only ever for at most a few seconds. The notification light is flashing red, telling me I have an email, which suggests that internally the phone is still working normally.)

I know it looks like a graphical glitch in these low quality images, but to me it looks too close to an actual image, I can see the ripples in the water and everything. I've never used this as a background image on my phone, I haven't seen it anywhere before. Nothing turns up when I try to reverse image search it on Google.

I'm wondering if I'm going to have to restore my phone to factory settings (as recovery mode is still accessable through the power menu) or if someone might know what the problem is and a less destructive way to fix it. It appears most likely to be a problem caused by the launcher acting up.

Thanks for any help.

Edit: New development. I pulled out the phones battery while it was still on, put it back, started it up again, and now instead of the coastline (which I'm guessing was one of default background images on my phone) the phone displays a default screensaver or animated background of some sort. Purple/blue, with bubbles slowly moving around.

The screen will stay on now, but still featureless and unresponsive with the exception of the power menu.

Edit 2: Repeated the same thing with the battery. Now the screen won't display anything at all after start up. Very weird.

Edit 3: I rebooted it and it's back to the purple bubble screen... I'll stop posting these updates now.

1
How can I access my photos/videos from my HTC Sensation XL default on 'charge only' and with unresponsive touch screen?
0
My Galaxy SIII Screen auto wake up
3
How to change Android default-natural orientation?
3
Nova Launcher: Lost the App Drawer Icon
1
Eight seconds after powering on, my phone goes dark and becomes unresponsive. What can I do?
0
Failed Android 7.1.2 install on LG V500 - stuck on boot screen
0
Select from screen - text recognition is gone
0
LG VS980 Bricked