Why do two smartphones connected to the same WiFi network show different speeds (one displays the link speed as 135 Mbps and other only 72 Mbps)?

I have two Android phones:

On average, download speed on Acer has been 6 - 9 MB/s whereas on Xiaomi it has been only 3 - 5 MB/s. This is quite surprising as Redmi Note 3 has a Snapdragon chipset and also supports dual band whereas Acer has a Mediatek chipset and supports only a single band (on using 5 GHz mode on Redmi Note 3, no WiFI signal appears).

What could be the problem and how can I improve the WiFi capacity of Redmi Note 3?

The link speeds you mentioned are usually achieved only under ideal conditions which is not usually the case in situations where there is a lot of wave interference from other devices.

802.11b: This was the first commercialized wireless standard. It offers a top speed of 11 Mbps and operates only on the 2.4 GHz frequency band. The standard was first available in 1999 and is now totally obsolete; 802.11b clients, however, are still supported by access points of later Wi-Fi standards.

802.11a: Similar to 802.11b in terms of age, 802.11a offers a speed cap of 54 Mbps at the expense of much shorter range, and uses the 5 GHz band. It's also now obsolete, though it's still supported by new access points for backward compatibility.

802.11g: Introduced in 2003, the 802.11g standard marked the first time wireless networking was called Wi-Fi. The standard offers the top speed of 54 Mbps but operates on the 2.4 GHz band, hence permitting better range than the 802.11a standard. It's used by many older mobile devices, such as the iPhone 3G and the iPhone 3Gs . This standard is supported by access points of later standards. 802.11g is also becoming obsolete.

802.11n or Wireless-N: Available since 2009, 802.11n has been the most popular Wi-Fi standard, with lots of improvements over the previous ones, such as making the range of the 5 GHz band more comparable to that of the 2.4 GHz band. The standard operates on both 2.4 GHz and 5 GHz bands and started a new era of dual-band routers, which accommodate two access points, one for each band.

Comparison between the bands

The 2.4 GHz band is a pretty crowded place, because it’s used by more than just Wi-Fi. Old cordless phones, garage door openers, baby monitors, and other devices tend to use the 2.4 GHz band. The longer waves used by the 2.4 GHz band are better suited to longer ranges and transmission through walls and solid objects. However, because so many devices use the 2.4 GHz band, the resulting congestion can cause dropped connections and slower-than-expected speeds.

The 5 GHz band is much less congested, which means you will likely get more stable connections. You’ll also see higher speeds. On the other hand, the shorter waves used by the 5 GHz band makes it less able to penetrate walls and solid objects. 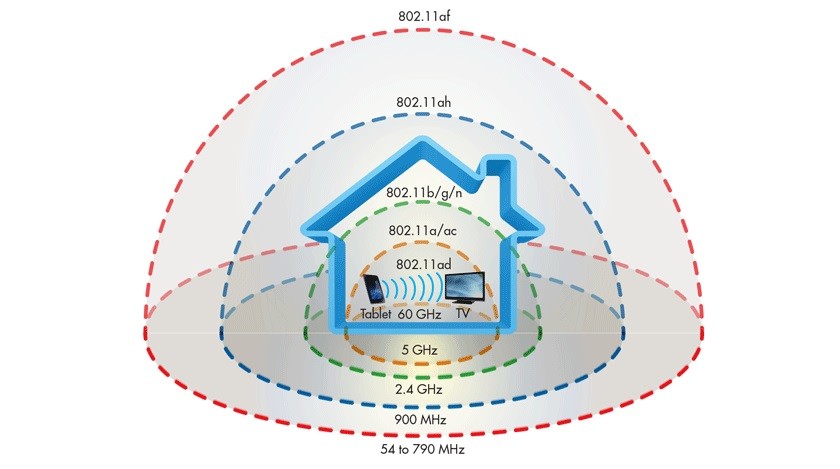 As a rule of thumb: The speed of a single network connection (one pair) is determined by the slowest speed of any of the parties involved. That means if you use an 802.11ac router with an 802.11a client, the connection will cap at 54 Mbps. In order to get the top 802.11ac speed, you will need to use a device that's also 802.11ac-capable.

Having gained this bit of background, we can see there are factors which may affect the speed of connection :

Not the answer you're looking for? Browse other questions tagged wi-fi connection-issues internet xiaomi miui or ask your own question.

0
Why does my internet only work in certain places?
0
What determines the LAN/SMB media file buffering speed for android devices

10
Is there a way to copy files directly between two Android devices on the same wifi network?
12
WiFi Signal drops out every 3 minutes
3
Why is one of my WiFi networks not visible after connecting to the other one?
8
Can't ping Windows 7 from Android phone and vice versa in the same network, but other machines can
2
Using Android phones with two antennas to programmatically transmit wifi and bluetooth at the same time
5
Wifi not working on Samsung S3 (WifiStateMachine( 2240): Failed to load driver)