I showed him the solution and it worked beautifully for him. But he would like to make it work whether Google Play Music is in foreground or background, which beeshyams in his answer said is possible but perhaps didn't add as OP didn't ask for that.

What am I doing wrong and how to achieve the Macro perform as required ?

Macro would look like this ( didn't add in linked answer so as to keep it simple and I had the macro ready ). Trigger and constraints would remain same. Only actions shown 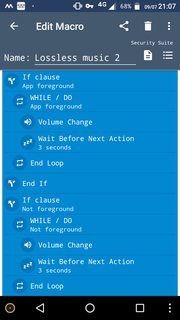 You may need a second macro ( for user convenience, and to ensure that macro is not active in other two states) to disable this macro. It would have empty trigger and single action of Macro Stop → Lossless Music 2. Go to the widgets section of your launcher , drag and drop Macrodroid widget to your home screen and assign it to the macro just created with empty trigger.

If Google Play Music is inactive as an example , but you are listening to music on another player, you certainly wouldn't want that player to be locked down. Or let's say you like listening to Heavy Metal on Play music with volume at 75% , you wouldn't want the same volume to persist. As additional precaution

I tested this for the other answer , so you are good to go with this