I've been following the instructions given here. Basically I just ran:

to fix a broken touchscreen issue on my Sony Z3 Xperia Compact with Android 6.0.1

Now some apps (e.g. Play store, the default Xperia Launcher and Spotify) seem to now reserve additional space where they don't place things. To illustrate my point, I attach a screenshot: 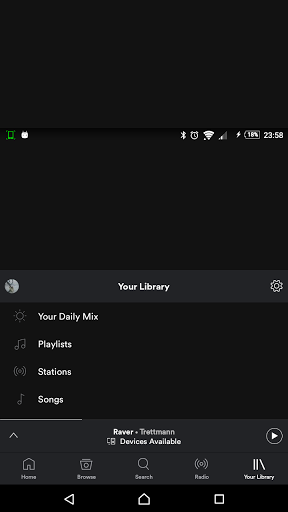 The black top third is what I wanted to have (because that's where the touchscreen doesn't respond). The middle third is what is added which I don't need. I'd rather use this space for the app I'm running, which is now entirely squeezed into the bottom third. As I said, this only applies to some apps.

Edit 1 I found some apps where this sometimes happens and sometimes not. This seems to be related to whether or they are trying to show a menu bar on top.

Edit 2 Gmail and google's Inbox have the same issue. Inbox even crashes.

Browse other questions tagged adb touchscreen or ask your own question.

12
Resize screen to display only on working part of semi-functional touchscreen
9
How to stop apps from doubling overscan?
0
WM Overscan is not applied correctly by some apps (like Google Maps, Play Store, Spotify)

7
How to extract .zip through ADB shell
5
Up and down arrows in adb shell
0
Tablet Touch Screen partially unresponsive
0
adb shell remove directory with patenthesis windows
9
How can I access multiple user spaces from adb?
0
adb shell immediately terminates