Prevent deletion of all data after 10 incorrect unlock attempts

"You've incorrectly attempted to unlock the phone 1 times. After 9 more unsuccessful attempts, this phone will be reset, which will delete all its data."

This is actually worse than just letting the attacker access my data, because now I can't get at it either.

As such, this lockscreen is actually worse than not having a lockscreen.

This phone is a (Tracfone) Alcatel (TCT) A577VL (supposedly a Pixi 5 HD), and it doesn't appear to be rootable easily.

1) How do I get rid of this feature, or replace the lockscreen application, without rooting?

2) The A577VL (Pixi 5?) does not appear to officially exist according to Alcatel; can I root it to fix this more easily? 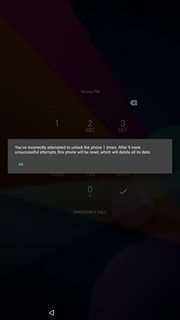 Browse other questions tagged lock-screens 7.1-nougat or ask your own question.