I've Googled and searched the market and can't believe there's no such app. Maybe some other SMS management app has this simple function, to unsplit messages longer than the 160-character limit that were broken into more than one part? Handcent and GO SMS Pro don't mention it.

For some reason (see the answers posted before Feb 17, 2013) people don't quite seem to "get" the problem. Here's a screenshot: 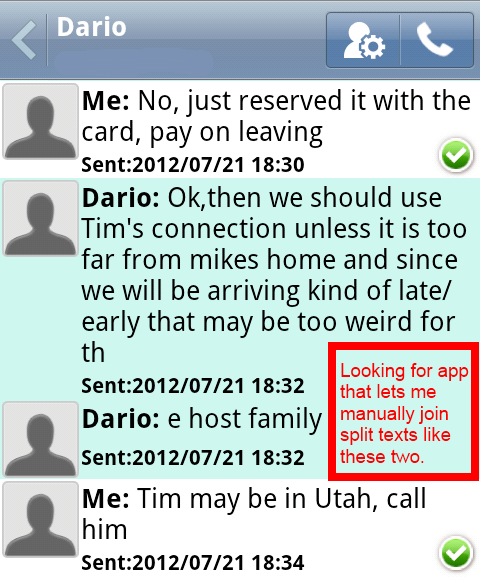 For whatever reason (incompatibilities between carriers in following the Concatenated SMS protocol etc.), I receive messages split in parts of <160 characters. What I'm looking for is a very simple app that would let me select two messages and join them into one, specifying which should be first.

SMSes are stored in a SQLite database, and it would be pretty trivial to append to one field the the contents of a few other fields based on a drag-and-drop interface. I'd code it, but I'm not experienced with Android development, and others could make such an app far faster.

I posted a request on xda-developers but the bozo admin there moved it and nothing happened.

SMS message concatenation seems to be a function of your phone's network technology (CDMA/GSM), the SMS application's support for the standard, and the message's origination/destination carrier combination.

Some carriers don't like long messages (over 160 characters) coming from other carriers and will not allow the correct message headers through to your phone, meaning your phone can't piece things together. A quick pulse of opinion on the issue also seems to indicate that CDMA networks are worse at transmitting concatenated messages, although the facts look to lean more toward the idea that CDMA was just behind the standards adoption curve. Your phone, of course, also has to know what to do with a long message when it sees one; mileage will vary.

Personally, when my dinc was stock it was very obviously up to Verizon to decide to give me a long message in one big piece - long messages from friends on other carriers were the only ones not concatenated. Now that I'm on MIUI the built-in SMS app seems to do better at it, but I don't text like I used to so I can't say for sure. I recommend trying various SMS apps, but you may be stuck under forces you can't control.

tl;dr - Many factors play into how long SMS messages are displayed on your phone.

(Info gathered from Wikipedia, research, blogs, and forum posts, among other places)

I've encountered similar problem and thought I might share my solution with the others who are having trouble with split messages. Maybe it's not the easiest and most "user friendly" workaround but it worked for me. Mind you that I've repaired (?) like this only about 40-50 messages - I wouldn't recommend my way for bigger amounts of SMS.

I am confused what you are looking for. SMS messages are no longer then 160 characters. If you type a message longer then that, SMS apps, like the "core" sms app, or handcent show then like they are 1 message, but, in the background, they are still sent as multiple messages.

Not the answer you're looking for? Browse other questions tagged sms .

5
Why do all my MMSes show up as videos?

11
How to transfer text messages from iPhone to Android with iOS 5?
2
SMS time stamps are behaving strangely
3
How to make Hangouts stop sending me SMS messages?
4
How can I merge SMS and Hangouts messages within Hangouts?
1
I have mmssms.db but the telephony.db is lost, can I get back my SMS messages in any way?
0
How to automatically crop text messages when SMS character limit is reached?
1
Short, less than 160 character SMS being split
1
Can't enable notifications for SMS messages with MIUI 12