What does “Answered remotely” mean in the call log?

What does "Answered remotely" mean on incoming calls in the call log? See the screenshot below to see what I'm talking about.

I had never seen this before until recently. Ever since September 30, 2017, Edit: Almost every incoming call from my girlfriend, and most incoming calls from another friend, both with iPhones on AT&T (I'm on Verizon). Calls before September 30 didn't have it, and calls from other people don't have it. I never see it on outgoing calls either (or missed calls, of course). Edit 2: The previous sentence isn't 100% true, but basically is (see the edit at the bottom). 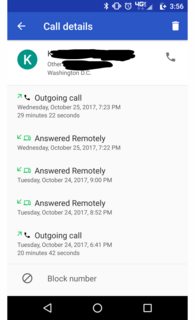 Does anyone know what could cause this?

Edit: This can't be relevant, because the other friend doesn't forward at all.

Just to rule it out, I asked her if she might know why it's saying this, if she's somehow calling from her computer or another phone or something, but she said no, she always uses her actual cell phone (an iPhone on AT&T, by the way, and I'm on Verizon).

My thought is maybe it started with some sort of update. I didn't do a system update on that day, but maybe the phone app updated or something. But that still wouldn't explain what it means or why I only see this for her incoming calls.

I found this forum thread where someone is having the same problem, but none of the answers make sense with what's going on. It does make me wonder if it's a Verizon specific thing on Android, but it's definitely not specific to my phone (Moto Z Force Droid).

One last thing worth noting: when I was searching, some people reported seeing "remote call" during the actual phone call. That looks to be unrelated. I don't remember seeing anything like that during the call itself, and the people who have that say it happens on every phone call.

That forum thread was the only other thing I could find about it anywhere, so I can't figure out what's going on.

Edit:
I discovered another friend where it shows "Answered remotely" after he calls me. He also happens to have an iPhone on AT&T. I made corrections above to note this. I don't see this when I get calls from Verizon iPhones, but I'm not sure if it happens with non-iPhones on AT&T (I've had plenty of other calls that didn't do it, but I'm not sure of the carrier.) Incoming landline calls definitely don't cause it.

Also, I've started noticing occasional incoming calls from my girlfriend (the person in the screenshot) that aren't answered remotely. But the vast majority still are.

Edit 2:
I'm still trying to get to the bottom of this, without much luck, but I have some new information: I've seen a small handful of calls with my girlfriend (the person in the original screenshot) that have the answered remotely icon under the regular telephone icon. I'm wondering if it's some sort of bug, but I really don't know. I say that because I saw this double-icon on at least one incoming, outgoing, and even a missed call, and it isn't labeled "Answered remotely," just has the icon. Also, this is rare, unlike the regular "Answered remotely," which happens on almost every incoming call from these two people.

Here's screenshots with the double-icon thing (and also more of the regular "Answered remotely"): 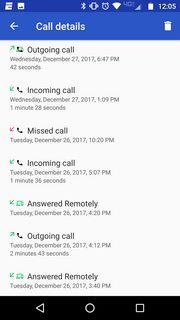 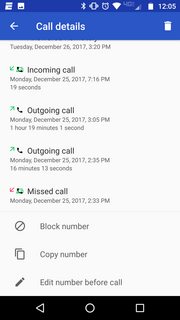 Browse other questions tagged calls call-history or ask your own question.

3
Avoiding “my cheek hung up on you” on an Optimus T?
4
View Android phone's call log from PC
6
Android added a plus sign before the number, making an undesired international call
4
Convert number in call log to Gmail Contact
0
Samsung Galaxy Ace GT-S5830 can't receive incoming calls
2
speaker option enabled by default when answering the calls
1
Why does the in-call volume change on its own on my Samsung Galaxy S3?
5
Phone app: what does the blue forbidden sign (with optional blue “A” in front) mean in the call log?
3
Incoming call doesn't stop the music in Nexus 5X