I am running AOS 6.0.1 (API-23) on a non-rooted phone. It's been working perfectly for months, but one day after updating some apps like Uber, Viber or Windy, I was told that Google Play services need to be updated as well and would not work properly, until then.

I then updated Google Play, Google Play services and Android System WebView, but then none of their maps was working, meaning that maps based on Google maps are just showing an empty blank map canvas without any features except the pins. I.e. showing the cars in Uber but no background map.

Somehow, after having installed all and everything Google related for my device, the in-app-maps was working again. Unfortunately, I have no recollection or idea what I did at the time that made it work.

Unfortunately now, 6 months later, I have the same problem again after some updates but this time I can't get my maps back. Although Googles own Google Maps, always seem to work... Nowadays I always use apkmirror to download, since they show the relevant app variations and are simply better that Google Play Store, which I no longer use. Here for example, is what's shown for Google Play services: 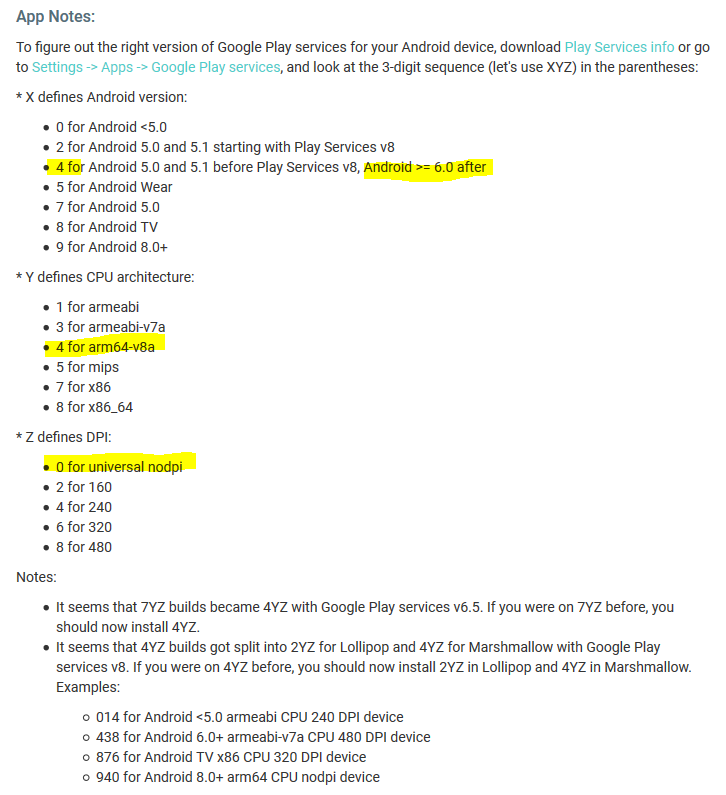 My device is a "440", at least according to the original firmware versions.

Most surprisingly, after reverting and/or updating some of the relevant Google apps, some settings got restored to some previous values. Those may also include permission settings and in my case, the Data Usage settings.

I solved this by first ensuring that the following 2 system apps were up-to-date:

Note that GSF is normally never updated and remains fixed for your AOS API version.

Next, I went to check the permissions of those apps. That's when I found that Mobile data had been mysteriously disabled under data usage. Check by navigating to:

Check both Mobile data and Wi-Fi tabs, and for both apps above. That fixed it!

For completeness, also check: Settings > Data traffic management > Networked apps and check that data is available on both the tabs Installed apps and System apps.

But since you're on it, you might as well also update:

If you still have map problems after this, then (a) make sure you're using compatible binaries (APK) for your specific device (API, DPI, arm version etc) and (b) that the permissions for all of these apps are as allowing as possible. Also, the device clock need to be correct...

I followed this video https://youtu.be/gBc5eIPOKWQ

Solution worked for me in Oreo version. Please node naming convention and path to reach cache could be different in different OS versions. But basics are same.

Not the answer you're looking for? Browse other questions tagged google-play-store updates google-maps google-play-services webview .