I used to select a google account each time I needed to add an app from google play. Then I would remove the account afterward. It is no longer possible. Are you aware of any changes on Android? I have android 6.0.1 phone Samsung SM-J510FN. 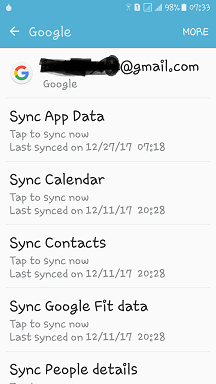 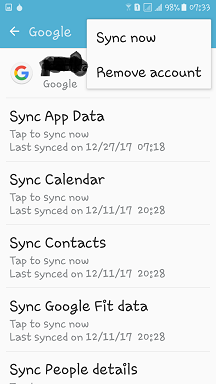 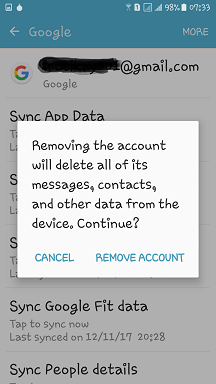 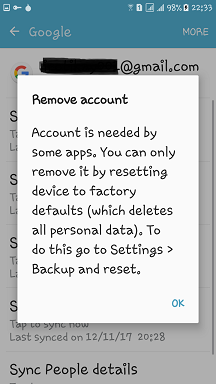 I too was able to remove my primary Google account until recently. When removing it, it used to warn me about device protection features would no longer work or something like that but it would let me continue after entering my phone's PIN. Google account was no longer listed in Settings -> Accounts.

But recently I've gotten the same message and screenshots above. It seems a recent update to Google Play Services is the cause of this. The solution that worked for me was Settings -> Application Manager -> Google Play Services -> More (top-right corner of Application info screen) -> Uninstall updates. Then tap uninstall (and/or "yes" or "ok"... I forget the exact prompts).

You should then be able to remove your Google account as described above. (This worked for me, anyway.) The caveat is most of your Google apps (and some non-Google apps) will complain that they won't run unless you update Google play services. (Which, if you do, puts you back in the same spot with removing your Google account. Resistance is futile, eh?) Most apps did still work correctly for me (they'll pop up a notification which you should be able to clear) but a few did not such as Youtube.

Not the answer you're looking for? Browse other questions tagged 6.0-marshmallow google-account or ask your own question.