I've upgraded my i9000 to Android 4.0 using CM9. I've found a major annoyance though. I've enabled spell-checking on my phone (the fancy one, with the red, dotted lines), but it appears to be available only in English, and 4 other languages. See this image: 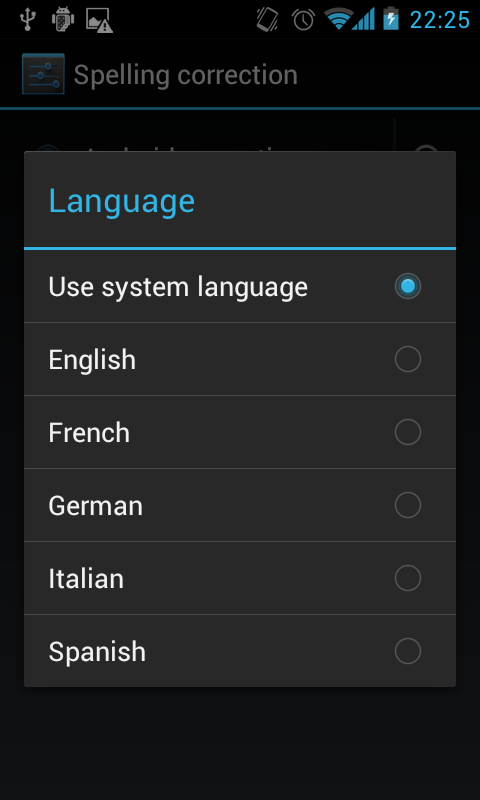 When I switch my entire system language to Dutch, the dotted line just disappears. I've Googled around and learned that Android.com officially states: "For specialized features or additional languages, you can now download and install third-party dictionaries, spell-checkers, and other text services."

However, I haven't been able to find language packs like these. I'm dying for one, and find it hard to imagine that months after the launch of 4.0 not a single language pack has been made.

Can anyone point me in the right direction?

I am currently on Cyanogenmod 4.0.4 and Dutch has been added. I don't know where it came from, but it works like a charm.

Not the answer you're looking for? Browse other questions tagged samsung-galaxy-s 4.0-ice-cream-sandwich languages spell-check .

5
Android ICS spell checker does not know how to spell (English)?

3
How to turn off red-dotted-underline spelling check when text-messaging?
5
Android ICS spell checker does not know how to spell (English)?
1
Can Galaxy S2 ICS be updated to enable spell-checker without rooting?
0
ICS ROM with no Slovenian language
0
Change Language
0
connection between spell correction, language selection, predictive text, and keyboard
1
Install Arabic language on Android ICS