My smartphone has ability to use two sim card or one sim card plus sdcard. Generally, I'm using second option (sim+sdcard), sdcard as adopted storage. I want to use second sim card temporarily. But if I will unmount sdcard and pull it out will I be able to use it later without problems?

It works as expected. I successfully unmount adopted storage.

First I moved all apps to internal memory. Then I unmount adopted storage from SD card options. 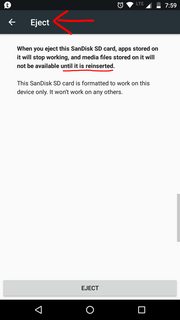 System starts syncing data that was not written yet and after minute there was intent notification "You can remove sdcard safely". So I removed card. Nothing wrong was happening. Of course, wallpaper disappears but it was predictable. 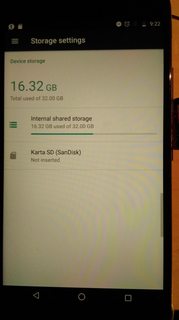 Another side effect was that I can't save screenshot so I made these photos by another phone.

After some time I inserted same SD card to smartphone and Android mount it automatically. Wallpaper appears again and all my files from SD card was in the same place as before.

Once you've adopted your external SD card as internal storage, you no longer can simply remove it without causing massive issues (apps crashing and the likes) – after all, the card is acting as internal storage then, covering everything that goes to /data/data (i.e. all the apps' data, configurations etc.).

The only way to take it out without causing issues is to convert it back to "portable storage". Which is technical possible – as long as there's sufficient internal storage available. If there is, I'd wonder why you've adopted the card – so that probably won't be done by just pressing a single button: you'd first need to make enough space, i.e. remove data stored in "adoptable storage" so the remains fit into real internal storage again.

TL;DR: No, you cannot simply unmount and take the card out to free the shared slot.

Not the answer you're looking for? Browse other questions tagged adoptable-storage .

14
How can I move apps to SD on non-adopted Marshmallow storage?
0
How to use DoubleTwist Sync with Android Marshmallow adoptable storage
0
Decrypting Adopted Storage: What's wrong with this process?
3
Mount sdcard partition as /data
0
Impossible to format corrupted SD card formatted as internal storage