SMS sending is auto-blocked, how to fix?

To a specific number, when I try to send a SMS, it is automatically/instantly blocked and fails.

Once, by mistake, I blocked sending messages to that number, but even after unblocking, the messages are still being blocked as if that number is still blocked.

I have deleted all old messages to that number, and also deleted all data and cache of the Messages app. 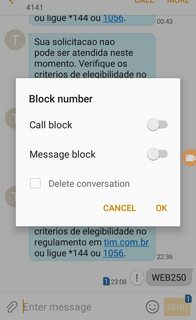 I have also tried to block and unblock again.
I went to application settings for this app but all looks ok.

I can send SMS to other numbers, it shows a waiting spinning icon and sends properly. But for the problematic number, it fails instantly, as if it doesnt even try to send the SMS at all, is blocked locally, by the Messages app...

I didnt find a fix the bundled messages app.
As workaround I just installed google's one and after 2 years I can send messages to the specific number again, thx!

Not the answer you're looking for? Browse other questions tagged sms-blocking or ask your own question.

6
Block incoming and outgoing calls and texts
9
Auto delete messages from a certain contact
0
How can I block annoying SMS From all numbers that start with a specific numbers?
3
Block SMS without number
0
Delivery of SMS from blocked contact
0
Blocked on android phone, will my messages ever be read?