Can I delete an app I got on sale?

I recently downloaded an app for free from Google play store. It usually costs $0.99, but is now free. If I were to delete it, will google remember that I purchased it, even though I paid nothing? Can I delete it now, and install it later without purchasing it? Thanks in advance!

Bochur's answer is correct. By way of additional information in your Play Store → Account → Order History , these apps will be shown as 0 price payment apps as the screenshot below shows - all these apps (barring third) were bought free (discounted) and I can install them again on any device (of course with the same account) 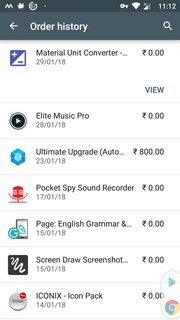 You can use apps you bought on Google Play on any Android device without paying again. However, each device must have the same Google Account on it.

Even though the app you downloaded was free now, being that usually it is a paid app, Google will count it as if you paid $0.00 and therefore it's counted as if you bought it. And as quoted above, purchased apps can be reinstalled later.

Not the answer you're looking for? Browse other questions tagged google-play-store uninstallation delete paid-apps .