I have a tablet that came with no Google (suite) applications however I managed to install them manually and are working pretty fine. The only issue is with Gmail application which seems to have problem with Google play services.

Everytime I open the Gmail application it shows a rather awkward, uncommon error meassage that reads: Gmail relies on Google Play services, which is not supported by your device. Contact the manufacturer for assistance` and I can't sync new emails or send new mails. 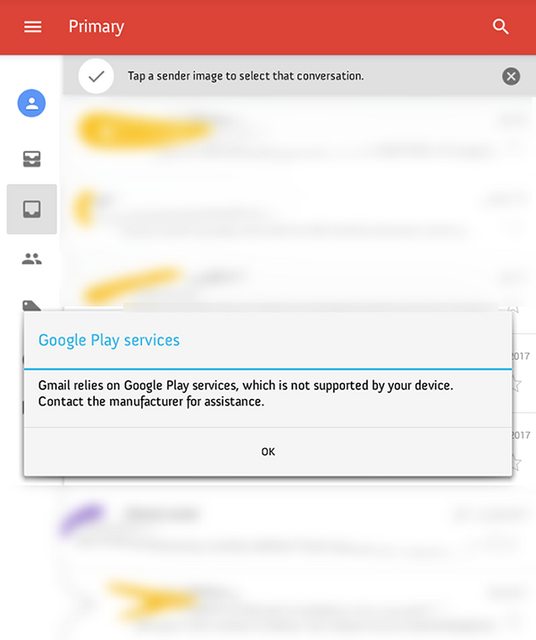 In my opinion this is a false alert, since other Google applications, work well and seem to interact well with the Google play services.

Previously to solve this issue with reference to Gmail, I have ditched Google play services in support of microG which works well with Gmail (version 6.4120760496) (as in I can sync new inbox messages and send mails from within the app).

However microG still misses some important aspects which is why I tried to switch to using default Google Play services implementation.

Things I have tried to resolve the issue:

Any way to fix this?

I believe it might not be a false alert... Your tablet may not be certified for Google Play, and that's probably why you are seeing this message.

On your computer browser, go to the Google Play Services app page on the Play Store: https://play.google.com/store/apps/d...roid.gms&hl=en. Click the Installed button, and see if you can select your RCA tablet to install to.

Got it from here

Not the answer you're looking for? Browse other questions tagged gmail huawei google-play-services .

0
Is there a way to control/use Google Play Protect together with microG (open source Google Play service alternative)?