TWRP saying no OS is installed

I was just going to install Xposed framework, but there normal Xposed installer didn't work. I tried to flash the file using TWRP but I got error code 1. No /system partition. When I try to flash other zip files, I get similar error messages. When I exit TWRP it warns me and say: 'No OS installed, are you sure you want to reboot?' When I reboot to the normal system partition, it just boots back into TWRP, same thing when I turn the device on. If I boot into the bootloader and start the device from there it does work and turn on. Once turned on everything works like it's supposed to, including Magisk. I can't find anything about this online, but I do know I once messed up my phone and flashed stock firmware using adb and fastboot from my computer.

Before going back to stock, I soft bricked my device by installing PixelExperience ROM twice, first in December, the 12-11-2017 version, later in January I installed the 01-21-2018 version. This one however, didn't work at first. I installed a 64 bit version of TWRP and tried again, after which it worked. After installing it, my device didn't boot. Maybe it could, but I was sceptical since it automatically booted into recovery. But after flashing the stock firmware, it still didn't boot. I figured out on accident that booting via the bootloader did work. Possibly the custom ROM did work, but just didn't boot normally, just like the stock firmware. Link to xda thread for the ROM: https://forum.xda-developers.com/g5/development/rom-t3710800 If you would like to look at the specific versions I installed, I still have them on my computer and will share them if asked. I completely reverted to stock and but it still wasn't fixed. 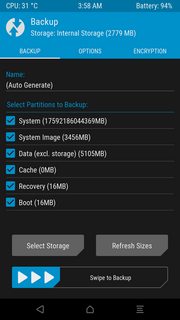 Oh and for my English, it isn't my native language and I'm only 14, so if you have trouble understanding it, please say it so I can explain it in another way.

When you just flashed the os, twrp will tell you sure you want to reboot with no os installed, even if you just installed it , i dont know why but reboot system after flashing the OS and your device should boot normally!

The size of your /system partition is highly suspicious indeed, which brings me two conclusions :

Not the answer you're looking for? Browse other questions tagged 7.0-nougat twrp xposed-framework motorola-moto-g5 or ask your own question.

1
Phone won't boot and won't enter recovery, even after reflashing TWRP
0
Moto G4 Plus doesn't boot after root
2
Is erasing the `misc` partition a solution to automatic/unnecessary boot into TWRP after having installed LineageOS 15?
0
TWRP loop on booting nokia 3?
1
Successfully installed TWRP and Magisk means bootloader unlocked?
0
Installed LineageOs16 on oneplus5 but I get black due to wrong firmware update how I can fix it?
0
Looking for help choosing the correct stock recovery.img file for my phone
1
Why Stock recovery replaces my TWRP?