What is MIUI optimization?

In MIUI (an Android ROM), there is an option in developer settings called MIUI optimization. When this option is enabled, an app can't be installed via USB (i.e. from Android Studio). 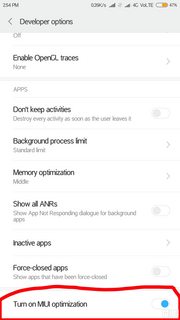 What is the use of this option? If this option is disabled, does the performance of the phone decrease?

According to this thread, this feature (Turn On MIUI Optimization)

enables a plethora of MIUI based settings & optimizations as per the guidelines set by the MIUI developers.

It helps to load the app and the app data in parallel reducing load times and ensuring a slicker user experience.

However, this setting can sometimes cause a variety of issues on non-MIUI based apps such as Google Apps & Apps from Google Playstore. Users have recommended disabling the feature if you rely on Google Play Store for apps & services or use Global Stable or Global Beta MIUI ROMs.

Here is a summary of observable changes when this feature is turned on or off:

With the MIUI Optimization Enabled, some users reported the following issues

After turning off MIUI optimization

In addition to @xavier_fakerat's answer, note that the "MIUI Optimizations" prevent the installers of various applications from launching correctly even on the phone itself, rather than over-USB. If you get unexpected "Installation failed" messages (not taking about Google Play Store; I never use that) - it might be a conflict between the installer and the MIUI optimization mechanism.

Not the answer you're looking for? Browse other questions tagged installation usb-debugging miui developer-options .

0
App installing takes a long time in a Work Profile