What is the lowest version of Android that supports split screen apps?

I'm looking to get an Android tablet and I'd like it to support running two apps on the screen at a the same time; what is the earliest release of Android to support this?

The basic Android framework has always allowed what you see on your screen to be drawn at almost any size, and the idea of having more than one view shown at a time was kicked around in more than one session at Google I/O 2011 as part of the "next-step" for Android Tablets on Honeycomb i.e Android 3.x.

source: Android 7.0: Multi-window for everyone

Samsung is the pioneer in implementing this multi window mode feature. It made its debut on Android with the Samsung Galaxy Note 2 all the way back in 2012, but it took a a while to make its way into stock Android (with Android Nougat version bringing native multi-window support, although the feature is somewhat hidden in Android Marshmallow as it still in beta phase).

Source: Android O feature spotlight: Multi-window apps now stay on the screen when you go to your homescreen, can be peeked into or maximized

Having emphasised that, several XDA developers, utilised the above described concept and took this idea into creating an Xposed module which would accomplish the task of producing the "Multi-Windows" to allow 2 or more applications to appear in windows on the same screen. So in short, there are workarounds to achieve this even on non Samsung devices or lower android versions than officially supported.

Since Android 4.0 builds upon the significant changes made by the tablet-only release Android Honeycomb, the module (having borrowed similar concepts from Samsung's Multi-Window , Microsoft's Aero Snap and various other inputs). has confirmed support for devices running Android 4.x+ and thus effectively lowest version of Android that unofficially supports split screen apps (but official for certain Samsung ROMs). Otherwise official support for stock Android starts from Android 7.

So what's more about this module?

Xposed framework: Xposed is a framework for modules that can change the behavior of the system and apps without touching any APKs. It therefore means that modules can work for different versions and even ROMs without any changes (as long as the original code was not changed too much). It's also easy to undo.

XHaloFloatingWindow: Is the module in discusion here that rings the multi- window feature to right about any compatible device on Android 4.x+. 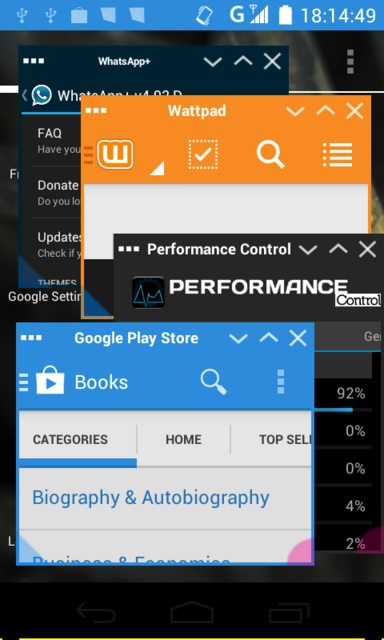 Disclaimer: I am not affiliated with Xposed or module thereof, but I use this Multi window module on my tablet device

While the code used to do things is a good bit different as an Android native feature, the basic concept remains and apps that use best practices in the code look and work the same, only smaller.

Not the answer you're looking for? Browse other questions tagged os multitasking multi-window or ask your own question.

7
Is there way to view two applications split screen on Android tablets?
24
Does Android suffer from the same "over a period of time" performance degradation that OSes like Windows do?
10
How do I run two programs at once in split-screen?
0
Multi window supported Android devices (without root)
6
Play sound from two apps simultaneously
2
Is it possible to run an app twice side by side on the MIUI?