Can 5GHz wi-fi be disabled in Nougat?

I have an ASUS Zenpad 10 that I travel with a lot, as in I'm connecting to other people's networks where I have zero control over the router settings.

Since upgrading to Nougat 7.0 the tablet now permanently prefers connecting to the faster, but usually weak and spotty 5 GHz networks instead of the slower but much stronger and much more reliable 2.4 GHz networks. They're still fast enough to stream Netflix so they're fast enough for me.

The tablet won't upgrade beyond 7.0, I assume this is controlled by my carrier, Verizon?

I would love to find a way to convince my Tablet that 5GHz simply doesn't exist. Is there a third party app for this or something?

Following this discussion with Izzy, I think your scenario is the opposite of the described problem in that post, it seems you simply want stick to the 2.4GHz connection because it is associated with better signal strength (although slightly slower when compared to 5GHz).

As such I'd recommend this tool called, Wifi Band Switcher on this thread. This app has been reverse engineered from the code from that gives advanced wi-fi menu since it essentially uses some standard AOSP hidden APIs. So the developer created an app that uses these same hidden APIs. With this you can force the WLAN band to be always the 2.4GHz.

Note: the app must be installed as system app.

Not the prettiest interface but could possibly do the job, it is essentially the same implementation found in native android ROMs: 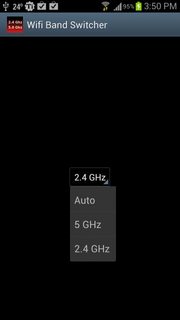 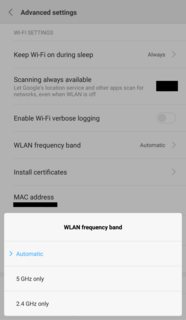 Alternatively you could try using using Wi-fi analyzer by farproc (to analyse the available bands) in conjuction with its open source plug-in Wi-fi Connecter Library to selectively connect to the 2.4Ghz band.

If you are viewing the AP list of networks in Wi-fi Analyzer which shows you both the 5.0Ghz and the 2.4Ghz, with this plugin installed you can then tap and connect.

Additionally as suggested by Izzy in that discussion, you could also try
Smart WiFi Selector(trial)

Not the answer you're looking for? Browse other questions tagged wi-fi 7.0-nougat or ask your own question.

4
Can't connect to WiFi using Nougat
0
Nougat downloaded but now not in notifications
2
Android Nougat - Network Security Configuration for Charles Proxy
0
Where can I find the Xposed Framework and installer for Nougat?
12
Prefer 5GHz over 2.4Ghz without disabling 2.4Ghz