What acts as the internal storage of an android device?

It's a flash memory chip on the mainboard of the phone. Usually it has the same electronic interface as an MMC, just soldered onto the board instead of in a socket.

An android's or any other mobile or tablet has storage chip that's embedded on to its motherboard.

To better explain that a typical HDD or Hard disk stores the data on a magnetic tape (slow). RAM will have multiple storage chips where the data will be stored on a circuit so that the data can been accessed quickly. SSD is an upgraded version of RAM with increased storage size (fast) . A mobile device has a chip on its motherboard to store data the same as the chips on a RAM or an SSD.

It's using flash chips, similar to those you have in USB drives. Almost exactly the same.

The storage technology is called EMMC. Linked wikipedia article has some pictures too.

This is an example of a 64GB eMMC flash storage module, basically the exact same thing that is used in android phones/tablets too. 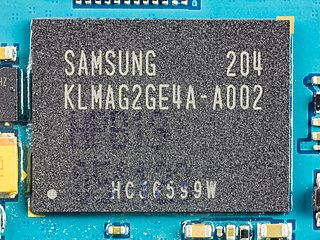 Not the answer you're looking for? Browse other questions tagged internal-storage hardware or ask your own question.