Chrome taking up lots of space on my Android device

I have an OnePlus 5T running Oxygen 5.1.4 (which is based on Android Oreo 8.1.6). According to the app DiskUsage, Google Chrome is using almost 15 GB of data. 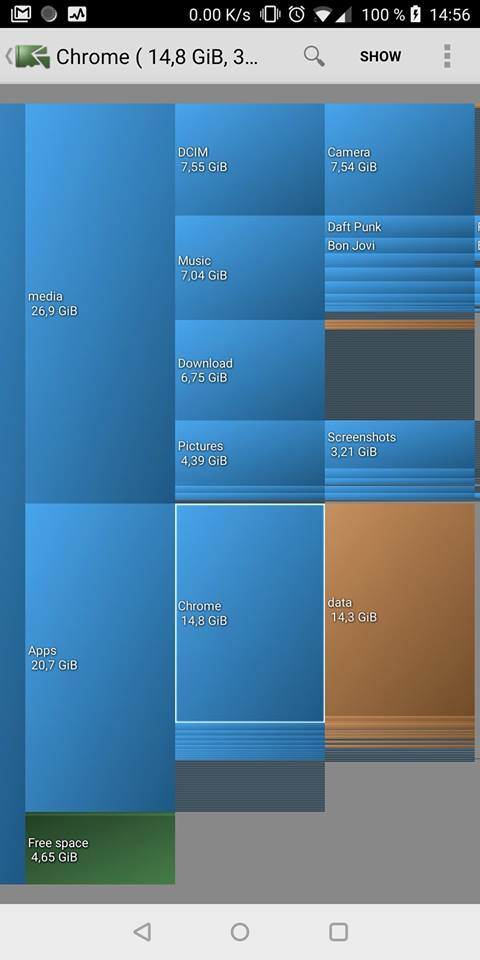 Apart from this insane amount of space (which no app should ever use), I've been trying to figure out a way to backup the data (and remove the data I don't want). But I don't see a way of doing this without unlocking the bootloader and possibly flash the ROM. I've enabled developer mode, I've tried backing up using the ADB drivers, but Chrome don't seem to let me backup it's app data.

But clearly the app data is there – and even DiskUsage can see it – and the device is not rooted.

1. Is there a way for me to see the app data of installed apps, without having to root the device?

2. Is there a way to backup Chrome, only so that important stuff is backed up (open tabs, the state of each tab, history, saved passwords, browser settings, etc) and neglecting god knows what Chrome uses the space for. I'd imagine these would be stored in SQLite3-databases under /data/data/com.android.chrome/, but as I'm unable to access the files I cannot know for sure.

6
What's in Chrome's data?
0
command to get current volume level
1
How to open local web pages in Chrome on external SD card
8
Why is my Android not restoring the app data from its Google Drive backup?
1
How can I delete from my smartphone the images downloaded by Google Chrome from the internet, which I can't find anywhere?