What do the "Pogo Pins" on the Galaxy Nexus map to?

I'd like to make my own doc similar to below. The official one for $90 doesn't come with a power adapter so I assume you just plug the USB charger into it. What pins from USB map to the three pins in the photo? 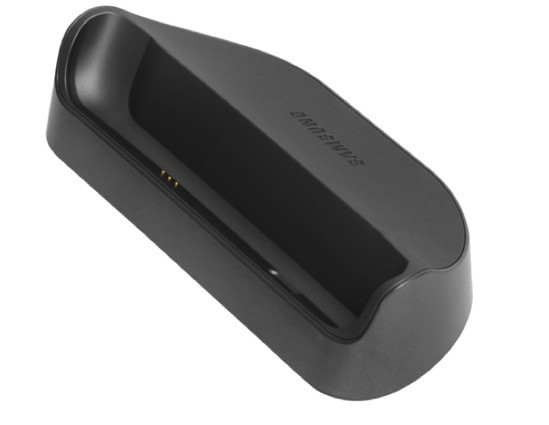 Someone over at AndroidCentral built their own charging dock. According to the post,

It is assumed that the middle pin is for letting the phone know it's connected to the dock and launch the needed activities (enable Bluetooth, launch apps, etc.)

This is an old question, but it's the first Google result for "galaxy nexus dock middle pogo" and I felt it deserved a complete answer for those who might look into it.

I've done a lot of dev work for the Galaxy Nexus, especially with the kernel. The kernel has code for the pogo pins and is very much in charge of them: https://android.googlesource.com/kernel/omap/+/android-omap-tuna-3.0-jb-mr2/arch/arm/mach-omap2/board-tuna-pogo.c

As others have stated, the 1st pin is GND and the 3rd pin is 5V (1st pin being the one closest to the power button). However, there's more to this than just giving power to the phone: you can actually take power from the phone. This is how docks can function without being plugged in (such as the car dock, which would need some power to run the components responsible for audio output).


The 2nd pin is tricky and confusing to me, but I'll try my best to interpret the kernel's code to explain it; feel free to look at the code yourself as well!

The middle pin does appear to do SPDIF audio output, however it first is used to identify the dock that is attached.
It sends a wakeup pulse of 100ms, and then waits for the dock (or whatever somebody may be trying to build!) to respond (I believe the signalling level is 1.8V, but double check yourself if you're concerned):
The response given determines what is connected. It expects the response to be high --> low --> high --> low.
The length of the first high determines the type of dock: desk (50ms) or car (100ms).
Then the dock (or whatever it may be) goes low, and I think how long that low is determines if the phone can draw power from the dock (50ms) or if it needs to give power to the dock (100ms). If the phone is giving power to the dock, it should be like a USB host: 5V/500mA. If it's taking power from the dock, it'd be like connecting a regular charger to the device, so it could be anywhere between 5V/500mA and 5V/1A.
Then the dock goes high again, and this determines if SPDIF audio should be output through the middle pin (50ms) or if it shouldn't (100ms).
Finally it goes low again and the identification stuff is done. There will be a slight delay before it begins to output audio however.

Google Play Store says the pogo pins are 5V, digital audio and GND. So I guess the middle pin is the digital audio and that the phone finds out it is connected to the dock because there is a 5V tension between 1st and 3rd pin.

Not the answer you're looking for? Browse other questions tagged samsung-galaxy-nexus .

1
Galaxy Nexus charges but is never seen by a PC when connected via USB
1
Reset battery status after changing battery?
23
Doing a clean install of Android on a Nexus phone or tablet
5
What is the application space limit on Galaxy Nexus?
3
Set a particular browser as "always"
0
Unrooting Galaxy Nexus - dies when plugged in
6
Galaxy Nexus won't connect via USB
1
Battery charging indicator and USB has, sort of, stopped working on my Samsung Google Nexus I9250
1
How to find what model of Galaxy Nexus I have?