Can airplane mode be maintained during a system update?

When on wifi, the phone can still receive notice that a system update must be performed, soon, with no user choice in the matter. It can even download and install this update over wifi. However, as part of the update process, the phone apparently disables Airplane Mode, connecting to a local tower to receive messages and whatever else might have been pending, potentially racking up a big bill in the process, which the user did not agree to or want.

Leaving the phone in a Faraday cage during the update, which might block transmissions to cell towers, would cause the update to fail until it is taken out, because wifi is required for downloading the update.

Why does the phone exit airplane mode during forced updates, and is there any way to avoid that?

Edit, responding to criticism that trying to maintain Airplane Mode during a system update is not a sufficiently clear or concrete objective:

There are multiple reasons why one might want to keep a phone in airplane mode. In addition to the cost factor noted above, if a destination does not have compatible cellular signals, a phone out of Airplane Mode may quickly drain its battery searching for towers, especially if the user doesn't know that the phone takes itself out of airplane mode without notice. In some zones, there are also restrictions on cellular transmissions (example) which do not necessarily apply to low-power wi-fi connectivity, such as on-board some commercial aircraft.

There are multiple different reasons why a person might be in a setting where it's important to maintain Airplane Mode but still wish to use the device for offline and/or Wi-Fi capabilities. This question is about how to do that even when the phone maker is pushing a system update.

If you want to block communication with your mobile network provider there is a second option: You just have to make sure the MNO can not identify your devices.

You can easily achieve that by removing the SIM card from your device.

This does not work of course in case you have a phone with eSIM and you use the eSIM (as the eSIM can't be removed physically from your device).

Turn off your Data and turn on "Flight Mode", now if Flight Mode gets reset you still have Data turned off (and Update won't reset that, because there would be a flood of complaints).

I have always done my updates over Wi-Fi using the settings to select that option. Using the Towers to Update would be expensive (for me). 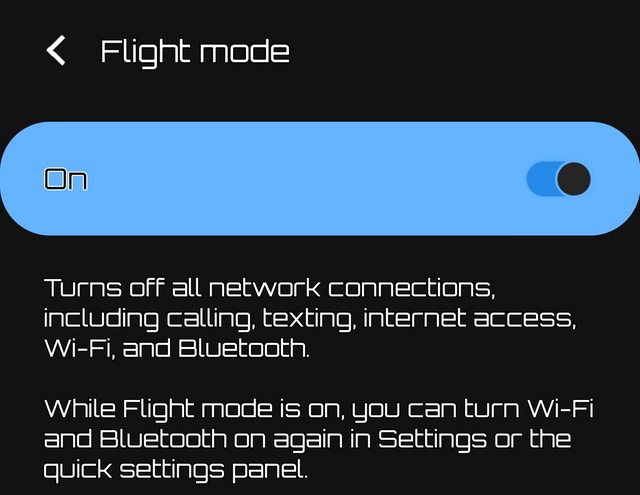 I updated Android recently. No Data usage, and a big savings by only using Wi-Fi. Only turn on Data if you must use it. Of course it depends on where you are and how much open Wi-Fi is available.

Rather than "activate Wi-Fi as needed" you need to get into the habit of "active Data as infrequently as possible" and leave Wi-Fi on (so when you hit an open Network you'll be pinged that you have something).

Remember not to use your passwords on strange unknown Networks, Google has single-use passwords if you are desperate and double authentication to ensure that it is you on your phone and not someone else, elsewhere. More about that is a different question, almost certainly a dupe.

Not the answer you're looking for? Browse other questions tagged samsung ota-update system roaming airplane-mode or ask your own question.

1
Can airplane mode turn itself off automatically

5
Do I need network's SIM in in order to receive OTA update
1
What can cause the Oct 2011 OTA update of the Galaxy Tab 10.1 to fail?
3
How can I schedule tasks?
2
How to force Backup Assistant to sync in airplane mode with WiFi on
4
for all Androids: does airplane mode always prevent location tracking?
2
Moto G XT1045 is stuck in airplane mode
0
Unable to enter recovery mode for Marshmallow manual OTA update on Nexus 6
2
Wiped System Partition… No OS.. How can I recover it back?