WhatsApp name hidden in group for only one person

The following image shows that a WhatsApp group admin (first in the list) has three smiles but his name is not shown. 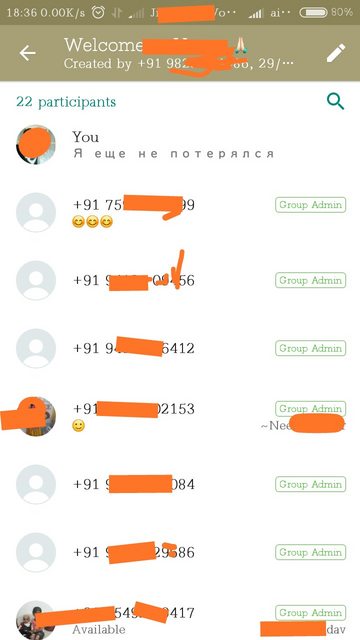 This name is not visible only to me while other members of the group are able to see three smilies as well as his name.

Firstly, I thought that he blocked me, but this isn't the case, because if it were so then I wasn't able to see whether he is online or offline and his about which is three smiles. The name was visible to me but it disappeared.

Why are other people seeing his name as well as three smiles while I am seeing only smilies but not his name? How did he make only his name disappeared only for me?

It is because your contact may not be added in his phone from which he is using whatsapp and he has set privacy option for about as show only to my contacts.

Not the answer you're looking for? Browse other questions tagged whatsapp-messenger or ask your own question.

0
Some groups are not visible in my WhatsApp
1
Not recieving messages from only one WhatsApp contact
1
How to delete Group Contact that is greyed out without an access to menu or drop down box?
0
WhatsApp Messenger not showing “last seen” for a contact
0
“Last seen” on WhatsApp for same contacts on different phones is not shown
2
How to join WhatsApp group from “chat?code=” link