What's causing my games to sometimes exit to the homescreen?

I have a Sony Ericsson Xperia Ray.

When i first bought the phone, it came with a 4GB class 2 microSD without a brand name. I could play games without problems and it was pretty stable.

Then I bought a cheap 32GB microSD without any class. I moved my files from the old card into a new one by copy-pasting them. When I play games (mostly big-sized games) the games will sometimes suddenly crash to homescreen without any "force close" option.

Then I thought it was maybe because of the cheap microSD so I bought a new Transcend 32 GB class 10 microSDHC. It is fast enough for HD games, and I'm satisfied with it, but the same problem happens - games will sometimes crash to homescreen.

Is this because of my storage space? Maybe I installed too much stuff on it? I have 80 MB free space. Maybe this is the cause?

If your foreground app is being closed without warning, the suspect is no other than Kernel. It generally happens when Kernel runs out of memory. In such case, Kernel reclaims memory by killing other apps, otherwise the device would be crashed. In such situation, Kernel doesn't respect multitasking (apps with background services, apps having icon in status bar etc) and in some cases, even foreground apps (when its very critical). When Kernel fails to do it due to CPU unavailability etc, the device really get crashed. This is how it works.

In your case, one or more reasons are responsible:

When it comes to fully filled big storage, system requires somewhat more resources to locate a file in it, but it doesn't cause this type of problem. You can reduce memory card size or files in it to lower down performance impact, but its not recommended. Its better to hunt down and remove always-running apps which are not extremely useful. Even if its useful, you should find its alternative which doesn't always run in background.

In the last, you can always install CatLog to see what happened after game crash. If you find it as alien language, Google it or ask here.

In such cases I would highly suggest to try to replicate the problem while usb debugging is enabled. Install the android sdk which will give you the necessary tools to "logcat" what's happening. The messages might give you a clue what is causing the sudden shutdown of your application. 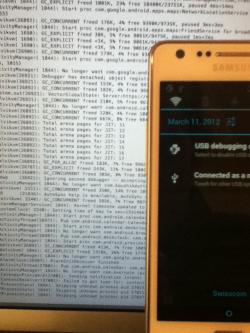 As suggested it might be a problem with low ram. Sony Ericsson Xperia S Phones sometimes feel sluggish especially if you use a lot of "widgets" such as the timeline and media player widget on your homescreen as they are quite ressource intensive. This might be indirectly linked to the shutdown of your games if there are many background services running there just won't be enough free ram for the game.

user26898user26898
1
2
Add a comment  |
Highly active question. Earn 10 reputation (not counting the association bonus) in order to answer this question. The reputation requirement helps protect this question from spam and non-answer activity.

Not the answer you're looking for? Browse other questions tagged crashes sony-ericsson-xperia-ray or ask your own question.

2
How do one know what is the reasons why an android apps exit with exceptions?
0
My icons in the homescreen are not showing up (galaxy s6 edge)