In Device Maintenance system app on Samsung Galaxy Note8, there is a TopBuzz cache shown when caches are being cleaned. Also in the safe mode. It reappears as a cleanup item every few minutes together with System cache item and they show 82 MB to clean up. 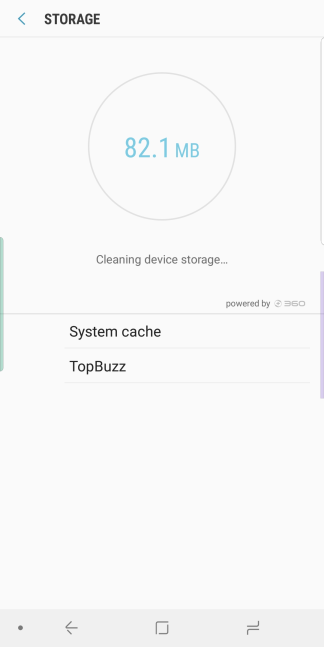 Since nothing like that is installed, I originally thought this is a sign of a malware, but after rebooting to the safe mode, the behavior continues and both items are re-appearing every few minutes in 82 MB size.

Is TopBuzz normal part of Note8 built-in software or is it possible that it somehow got into the phone later? How can I determine what is happening here?

Update: Samsung support replied me that "TopBuzz is not a part of their device".

I have a Samsung Galaxy S8 and have the same problem as you with TopBuzz showing up in the storage clean but unable to find it anywhere in my phone.

I tried the SD Maid app but that did not help. However, I did try Clean Master which I have used in the past with my old phones becuse it does work better than the built in storage clean (but uninstall it when im done with it because im sure that it slows down the phone to make you use it from time to time) and that appears to have fixed the problem.

Samsung support has replied me that "TopBuzz is not a part of their device".
So this is most likely a sign of an utilized exploit where a malware can compromise even non-rooted device.

I'm almost a year late, but I've also recently noticed TopBuzz appearing on that Device Maintenance screen as well, starting a few days after I installed TikTok, about a month ago. Finally guessing at a connection between the two, I did a bit of Googling to discover that TopBuzz and TikTok are both products of the Chinese company, ByteDance (which seems very fond of MidWord-capitalization in their PortManteaus.) Thus, I'm guessing that TikTok downloads with a non-interactive TopBuzz client for producing in-app ads, creating an advert cache labeled TopBuzz.

If anyone can come up with a method for verifying this, I'll add my findings.

Not the answer you're looking for? Browse other questions tagged malware cache safe-mode samsung-galaxy-note-8 or ask your own question.

0
How can I identify the cache if I see its name? One name is suspicious
0
Can a malware compromise safe-mode of non-rooted device?

5
Galaxy S3 randomly booted into safe mode. Strange behavior
1
What caches can be cleared, when wanting to keep settings?
2
Problems with the DNS Network part (or maybe virus/malware-related) on Android 6.0 Marshmallow (Alcatel Vendor)
0
How can I identify the cache if I see its name? One name is suspicious