What kind of applications use internet on the background? [duplicate]

Viewed the list of applications that use Wi-FI and came across what is shown on the image below. 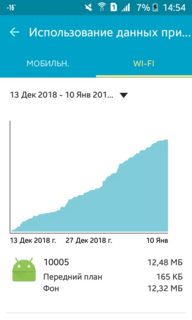 What it is? Virus? Instead of Google I use F-Droid. Root is there, but only Total Commander and Titanium Backup are available. Phone - Samsung Galaxy J1 Mini. Rooted, twrp. In applications "10005" does not exist. Titanium Backup was deleted 2 month ago.

Every Android app (including system apps) is a *NIX user and is assigned a unique UID within range 10000-19999 at the time of installation or during first boot (for pre-installed apps). That's how Android enforces Discretionary Access Control on apps.

The number you showed looks like UID of some app which has been removed now. You can check UIDs of installed apps from file /data/system/packages.list. UIDs near to 10000 are usually system apps or builtin Google/OEM/vendor apps.

If you have root, you can track/control apps' internet access based on their UIDs using Linux kernel's built-in firewall netfilter, which is controlled by userspace tool iptables. AFWall+ makes use of the same.

Not the answer you're looking for? Browse other questions tagged 5.0-lollipop malware virus or ask your own question.

7
Mysterious app in battery screen
0
What is this unknown app using my wifi?

1
Set the background image of the main menu in Lollipop
1
Some apps cannot access the internet
1
What are the benefits of Lollipop? [Features]
1
What is the scope of Google Play Protect's scanning?
1
Malicious software runs on the background of Android phone, but I cannot see it - how to find and remove it?
0
What does it mean when appears a no Sim/SD Card when I turn on internet