Why doesn't BOINC use the CPU power fully on my Huawei P9 lite?

I installed BOINC on my Huawei P9 lite.

I want the phone to run BOINC applications, when fully charged and connected to a wall outlet or PC. However it seems, that BOINC has no means to acquire all computing resources on that device. Antutu Benchmark shows no more than 68% CPU load and when inspecting the actual CPU load only four of the 8 cores are showing full CPU load the others exhibit half load and lower CPU clocking. Battery temperature doesn't exceed 29°C, which is fairly low. (I'm not living in Siberia)

Computing performance seems to be low, too, when compared to an old Samsung Galaxy S5 with lineageOS installed. I tried to find all settings concerning power usage and so on, but there are virtually none execept power saving mode and ultra power saving mode.

When I start the stress test of AnTuTu Benchmark, the battery temperature rises to 37°C, soon. All cores show nearly full load then.

Now what bugs me is:

Don't get me wrong, I don't want to wear down my phone intentionally (in fact, on my old phones I don't give a s*** on that). But I want to have control over what I do on my devices.

Did a test run with CPU-Z. It clearly shows, that the overall CPU-load is just 30% while Boinc running in the background. So the device must be throttled somehow. 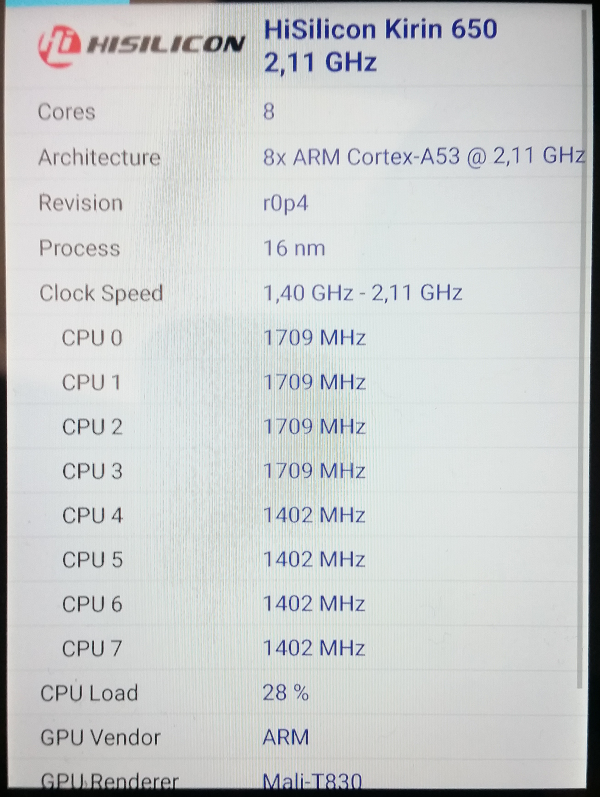 ** Update ** I added the thermal measurements from CPU-Z. [ 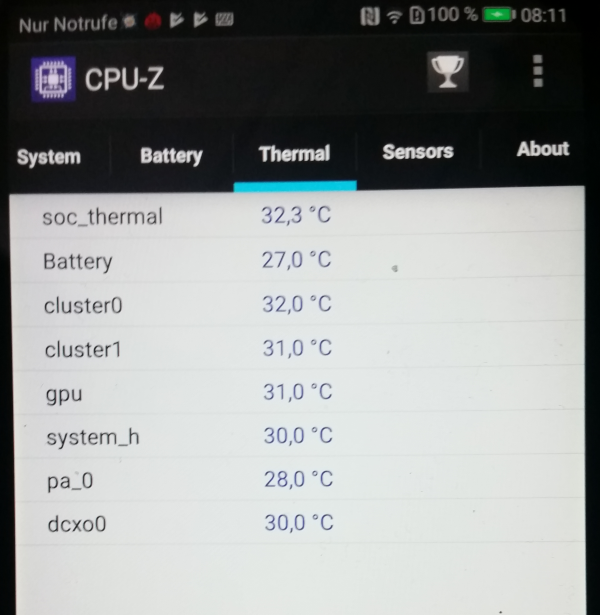 It is rather obvious, that the temperatures can't be the cause for the throttled CPU. Anyone more clues why and how BOINC is kept from using the resources and how I can influence that behaviour?

Yes it is true, the Huawei P9 lite has a Octa core CPU, however not all 8 cores are the same. Instead it follows the ARM BIG-little concept:

The 4 "BIG" cores (2.0GHz) are dedicated for maximum CPU speed. They are optimized for maximum performance (at cost of power consumption).

The 4 "little" cores (1.7GHz) are optimized for minimum power consumption. They are pretty slow compared to the BIG cpu cores (more than the 15% the cpu speed comparison indicates) as they are mostly used when the phone is in stand-by mode and does not have to compute much.

Therefore it is not unusual that only 4 of 8 cores are used. You should use a system info app that displays the current (not the maximum) CPU clock speed of all 8 cores. You should see that 4 cores work at 2.0 GHz - so the BIG cores are used. For my device the app CPU-Z works and displays the clock speed (the refresh speed is not very high so you have to wait some seconds).

Not the answer you're looking for? Browse other questions tagged stock-android huawei cpu or ask your own question.

14
Why doesn't Huawei provide just the USB driver to use ADB?
2
CPU-Z shows 8 cores, but 4 of them are stopped
0
Performance troubles with Motorola Moto X Force (Android 7.0)
4
Number of available cores
0
What's the point of pseudo-big.LITTLE CPU in Nokia 7 plus?