How do I understand the storage usage of an application? How do I solve my phone becoming slow? 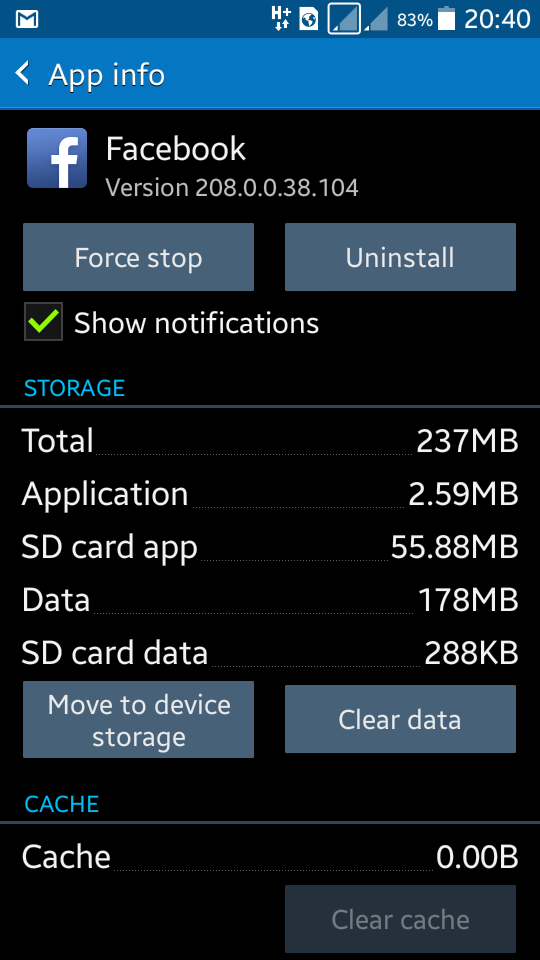 When I installed the FB application, the size was 49MB. As recommended, I then move it to the SD Card. I expected that the memory internal usage would not be so congested. The app was working fine initially. But later, the app and my phone was working very slowly, and many times stopped working. Then I checked, and I found the memory usage's status is very different between installation and the current. There are 237MB memory occupied (after I cleared cache the memory), and only 55.88MB stored on SD Card.

Then my question is, where is the rest of the app is stored? In internal memory? How do I solve my phone from being very slow?

49 MB is the size of the installer, the install itself will be much larger. And moving an app to external storage does not move every component of an app, you will never get a 100% data move.

Not sure who advised you to move facebook to external storage, but it is best practice to leave apps on the default install location (interal memory for most apps). External storage is not directly attached to the phone motherboard, and MicroSDHC SDXC card speeds are lower than internal soldered-on memory. So unless you are running critically low on space for internal memory, leave facebook in (or move it back to) internal memory.

About cache clearing. Although "cache cleaners" and similar tools look good, a cache clear is at best ephemeral and at worst annoying as all the apps that needed cache in the first place need to repopulate. The exception that proves the rule is facebook...clearing cache once in a while frees up a ton of memory and noticably improves performance. Facebook cache is the one cache item I do delete manually from time to time.

If an uninstall of one of your two facebook apps, and a move back to internal memory, and a facebook cache clear don't help, you'll need to investigate other possibilities.

Not the answer you're looking for? Browse other questions tagged applications 4.4-kitkat insufficient-memory .

2
Internal memory decreased even if no apps is installed
2
Why an SD-card saved app uses phone memory
2
How to resize Prestigio PAP4044Duo's partitions?
0
I have factory reset my phone, there is almost a gb of app installation space
0
Unexpected "insufficient memory" warning w/ adopted SD card
1
How I can use SD card as internal memory?