"Device Admin" apps are asking for permission to erase my data after failed login attempts! How can I confirm?

I was about to install the Outlook app on my phone, when it asked me to activate it as a device admin. (See image below): 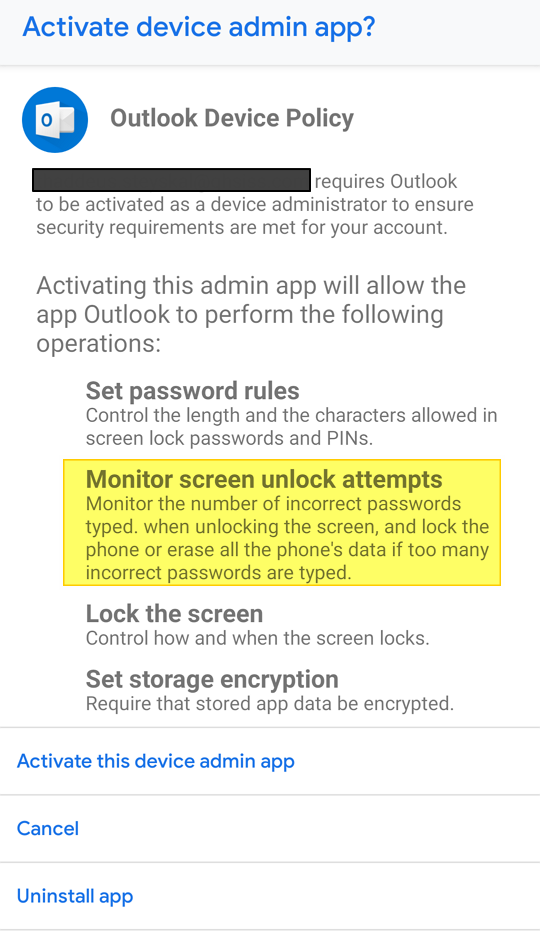 I'm sure few people read the whole warning. One part greatly concerned me:

Well shoot, if there's risk of all data being erased, I'm not really not that interested anymore! I often accidentally swipe patterns while I'm holding my phone in my hand. Plus a friend or young family member may be fooling around with my phone, unknowingly creating me a very long restoration process and lost data I can never get back.

Is this just a generic warning given for any app requesting admin privileges? Perhaps it's possible that Outlook doesn't use the erase feature?

Only the operations which the app can perform are shown to the user. If the device admin screen shows an operation like "Monitor Screen Lock Attempts", then rest assured, the corresponding app does have that feature.

I am sharing an image from an app named Tasker which employs only one device admin operation and is asking only for it. This should be sufficient that the device admin screen doesn't show generic operations but only app-specific ones. This can further be tested against the list of maximum operations that can be shown from here.

Is there a way to verify how many incorrect login attempts will trip the erasure?

Developers might be able to see it by analyzing the code from the APK using special tools. You could test this using trial and error on your own by using android-x86 and running your app on it. Try incorrect passwords and count for yourself. I'm not aware of an easy way.

Can I override the ability for it to erase my phone?

I do not know as of now. An Xposed module like Bypass Exchange Policies might be able to do this.

"this is an app-level wipe, not a device wipe. The Outlook app will reset and Outlook email, calendar, contacts and files data will be removed from the device, as well as from Outlook’s cloud components. The wipe will not affect any of the user’s personal apps and information."

Phew! wish they said that in the install process TBH.

Not the answer you're looking for? Browse other questions tagged security outlook device-administrator remote-wipe .

17
Are the apps safe? How can I make my Android more secure?
10
Can Android phones be set to automatically wipe all data after a certain amount of failed logins without an app?
2
How to enable device administrator for exchange after user has declined
1
How can I easily deny other apps from accessing my personal data?
1
How to enable device administrator for specific apps using Tasker?
1
How can I uninstall a device admin if the Deactivate button doesn't work?
1
How can I limit the number of fingerprint attempts before fallback to other login type?
0
Can Android Device Manager remotely erase my stolen phone's data AFTER synced gmail account's password has already been changed by me?
1
How to make Magisk request permission/fingerprint every time for certain apps?
2
How are apps installed on Android ? context - symbolic links of only some apps disappear after reboot