How to tell if your phone is refurbished

Is there a way to tell if an Android phone is an original or a refurbished product?

On some devices, yes, there is a way. I am not certain which specific devices this works on, but there are two methods you can try. The most platform agnostic way to do it is generally the following: 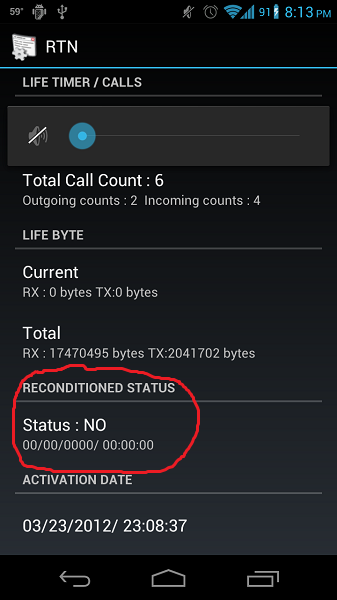 The less portable (manufacturer dependent) way of doing this is to open your dial pad and enter the dialer code ##786#, which will also take you to RTN if the dialer code is supported. On some devices it may also work with *#*#786#*#*. All of the above directions were summarized from this blog post.

Not the answer you're looking for? Browse other questions tagged hardware or ask your own question.

4
How do I load android 2.3.4 onto my dev phone?
1
Is my phone hardware damaged?
0
Protecting Android Phone
0
I have bricked my android phone. Is there any way to go back?
0
Can Android Device Manager only locate your phone if it is signed in to your Google Account?
1
Is tethering/hotspot dangerous for your Android phone?