How much power does a Galaxy Tab 10.1 charger need to supply?

The Samsung Galaxy Tab 10.1 comes with a special charger which (I'm assuming) provides a higher current output than the USB standard. Without it, the device can actually die, even if the USB cord is plugged in to a USB port (albeit a little less quickly).

I'm looking for other (cheaper) AC and car adapters, but I don't know the minimum power they need to provide to power the device. Does anyone know the minimum current needed for a 5V USB connection for the Galaxy Tab 10.1, or perhaps a link that provides this information?

This turns out to be more complicated than just the amperage rating of the power adapter.

This XDA post says that the Tablet itself may 'step down' to 0.5A charging if it cannot detect the right support in the USB host. There are some additional details in this post but I don't grok them.

That thread led me to this slashdot comment which seems very useful and knowledgeable. If I understand the story correctly, unless the tablet can negotiate with the host device, the amount of power it can draw is limited. A physical "hack" (now part of a USB standard) in the adapter can make it clear to the USB client (the tablet) that there is no host device (its a wall wart), so it can charge faster. Without the hack, the device is limited in the amperage it can use.

More details on the USB charing spec are on wikipedia.

I just verified some of this with my Samsung Galaxy Tab 10.1 and the no-name 2A USB wall charger I have. If I plug my tablet into this "unapproved" USB adapter, then I get a little red "x" on the battery charge indicator in the system tray. Additionally, I get the "media scanner running..." alert (which I think means that the Tablet thinks it might be connected to a computer). I cannot tell at what rate (2.5mA, 500mA, 2A, etc) the tablet is actually charging at, though.

If I plug the tablet into the 'approved' wall wart, I get no such red "x", nor any "media scanner" alerts.

All that said, in practice, I've found that the tablet will charge up on my no-name USB adapter. I'm not sure if that's because I tend to turn the screen off (and I don't have 3G), and thus the power draw of the sleeping tablet is less than the 500mA, or if its actually getting the full 2A.

I think the upshot is that any reputable wall charger or anything labeled as "compatible" with an iPhone or iPad will probably support the USB charging spec, and thus will fast-charge a Samsung Galaxy Tab. But I'm just guessing. It would be nice if there was an official USB logo or label for chargers that supported this mode ... 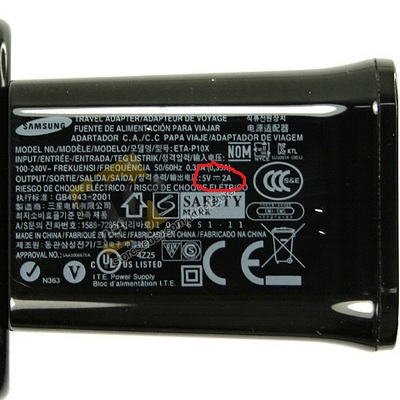 The Galaxy Tab 10.1 original charger provides 2A. But providing 2A is not all it takes to make your tablet happy.

In order to use the 2A, the tablet needs to recognize the charger as a charger and not a computer's USB port. The tablet is not allowed to draw more than 0.5A from a USB port. So if the tablet thinks it is connected to a real USB port, it will display a red cross on the battery and charge slowly at best.

A Samsung charger will signal it is a charger and not a data port by shorting the data lines D+ and D- and pulling these 2 lines up to ~1.2V.

A third party charger is likely to leave the data lines disconnected, so the tablet will assume it is a normal USB port and use only 0.5A, even if the charger can provide 2A or more.

I believe Apple chargers short D+ and D- but without setting a specific voltage for this line. An "Apple compatible" charger might not work.

To charge a Galaxy Tab using a non-compatible charger or any 5V source, you can reproduce the behaviour of a Samsung charger by adding the following USB adapter between the charger and the USB cable:

I tested this on a P7510. It probably works also with other Samsung devices. Note that if you use this to charge your tablet from a PC there could be a risk of frying your USB port. And of course, it blocks all data transfer.

USB 2.0 Switches are rated to deliver only 0.5A, as are the USB sockets on most desktop computers. If you plug in your tablet to these, they will only draw 0.5A. If you're watching video, surfing or gaming, the tablets can easily draw twice this amount, which means they will be taking half their power from the battery. USB 3.0 switches might be able to supply more.

If you have a laptop, it can supply 0.5A if plugged into the wall, or only 0.1A if running on batteries.

So, if you want to charge your tablet quickly:

Not the answer you're looking for? Browse other questions tagged charging samsung-galaxy-tab-10 .

20
Galaxy Tab is not being charged through USB Cable
5
Samsung Galaxy Tab, charging technique through USB Cable
2
MTP mode instead of charging with plugged in wall charger
2
How can I make my Lenovo ThinkPad tablet charge up faster?
1
My Galaxy Tab 3 will only charge from the wall adapter from Samsung
1
Can I charge my Samsung tablet without the plug in charger? Are there any other ways?
-1
samsung tablet 2 charging
0
Can I charge Samsung Galaxy Tab 10.1 from USB?

10
Google IO Galaxy Tab 10.1 refuses to power on, any hope of revival?
5
Samsung Galaxy Tab, charging technique through USB Cable
1
How can I pick the correct replacement usb charger for my phone?
5
My phone doesn't always charge at full speed, even with certain 2-amp chargers. What are the necessary conditions for it to charge at full speed?
3
Get the charging rate without external hardware (e.g. multimeter.)
0
Using macbook USB charger for android tablets and phones
0
What kind of charger do I need to get for my Galaxy Tab?
0
Can I safely charge a SGS9 device with a 5.2V MacBook Pro 2018 USB-C charger?