It turns out that WhatsApp Messenger is affected by an exploitable buffer overflow vulnerability, which can be used to take over the phone with "zero clicks", by placing a call using specially crafted packets:

It's 2019 and a WhatsApp call can hack a phone: Zero-day exploit infects mobes with spyware

Update WhatsApp now to avoid spyware installation from a single missed call: NSO Pegasus spyware can turn on a phone’s camera and mic and collect emails, messages, and location data

Reading the article from The Register:

A security flaw in WhatsApp can be, and has been, exploited to inject spyware into victims' smartphones: all a snoop needs to do is make a booby-trapped voice call to a target's number, and they're in. The victim doesn't need to do a thing other than leave their phone on.

Engineers at Facebook scrambled over the weekend to patch the hole, designated CVE-2019-3568, and freshly secured versions of WhatsApp were pushed out to users on Monday. If your phone offers to update WhatsApp for you, do it, or check for new versions manually. The vulnerability is present in the Google Android, Apple iOS, and Microsoft Windows Phone builds of the app, which is used by 1.5 billion people globally.

Now, I'm a bit confused. I have checked the WhatsApp application version on my Samsung:

(Why is this so complicated? Google should demand that applications deposit their version string in an easily perusable database, as sanity would command. Anyway...)

So I have Version 2.19.134. According to the Facebook advisory, that should be good.

But when I check in the Play Store, I see "Last updated 10 May 2019", i.e. before the weekend. No version information is given here, somebody in the design office needs to be given the lash. And is there a change log somewhere?

Finally, when I go to https://www.whatsapp.com/android/ I am told that I can "Download now" Version 2.19.137, which is three minor ticks up from the version I have.

For added lulz, the "Update Notification" screen: It shows that Whatsapp Messenger has been updated "2 days ago" (i.e. somewhen around Monday), but doesn't give the new version number and coyly doesn't really say anything about any security problem. 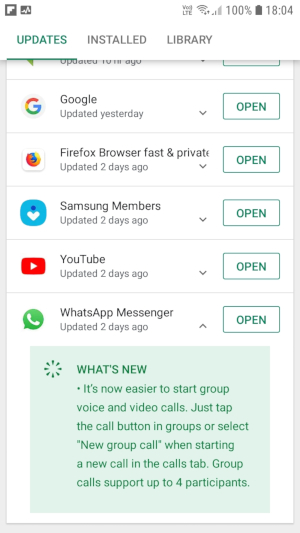 In cases of proprietary software vulnerability coupled with a lack of proof-of-concept and detailed technical information about the exploitation you have to rely on the word of softwares' developers, follow their instructions, and be content that you are safe.

Should I just not worry because I'm at the safe version (about which I have now contradictory information).

You do not have contradictory information. Your Play Store shows 2.19.134 and so as the app itself. It would have been contradictory if these two mismatched.

Should I just wait until WhatsApp Messenger updates itself (which presumably will happen soon, or maybe can be explicitly triggered).

Should I install the version at https://www.whatsapp.com/android/ instead of using the Play Store (I'm not even sure that would work).

The Facebook advisory clearly mentions that versions prior to 2.19.134 are affected. As long as you have 2.19.134 or above you are safe (according to Facebook). There is no need worrying about why the official website has some higher version available. You can always try installing that one. If the signature mismatches with the sideloaded version the app won't install, and you should put this matter to rest. If it matches you would have the latest app and that should definitely work.

I recommend you go with the latest version available (2.19.137) from https://www.whatsapp.com/android/

That's where I usually upgrade from anyway. I tried it out a few hours ago, and it does works.

But I have no way of verifying it fixes the issue, as no release notes found.

Not the answer you're looking for? Browse other questions tagged updates security whatsapp-messenger .

6
Disable or prompt VoIP calling on Android Whatsapp
1
How can I update old Android devices to get fixes? (for issues such as Dirty Cow)
0
Can the video chats on Messenger or WhatsApp be hacked?
1
Can Hike Messenger steal WhatsApp data?
11
How to export/convert WhatsApp chat to PDF/Excel/HTML?