I have a bootleggers ROM (Android 9 pie) installed on a Motorola Moto E 2015 phone. Can I add a quick settings tile that would toggle the GPS (location) on and off?

I know there is already a "location" tile, built in the rom, that can switch between different location modes (high accuracy, etc.), but I only want to toggle the GPS on and off, not to change the modes. Also, I already solved this by using Tasker and QuickTask app to create a custom tile. And it works, but sometimes it takes some time for it to respond (which is understandable having in mind my phone's specs and the fact that now two additional apps are used to control the tile). I don't know if the delay is caused by QuickTask, by Tasker or by both, and it also depends on how many apps are open at the time that I use the tile.

So, maybe there is a more reliable and quicker solution.

So an answer to my other similar question helped me find a solution for this one as well.

It is possible to toggle the GPS with an app Automate.

Here's a screenshot of the complete flow I'm using: 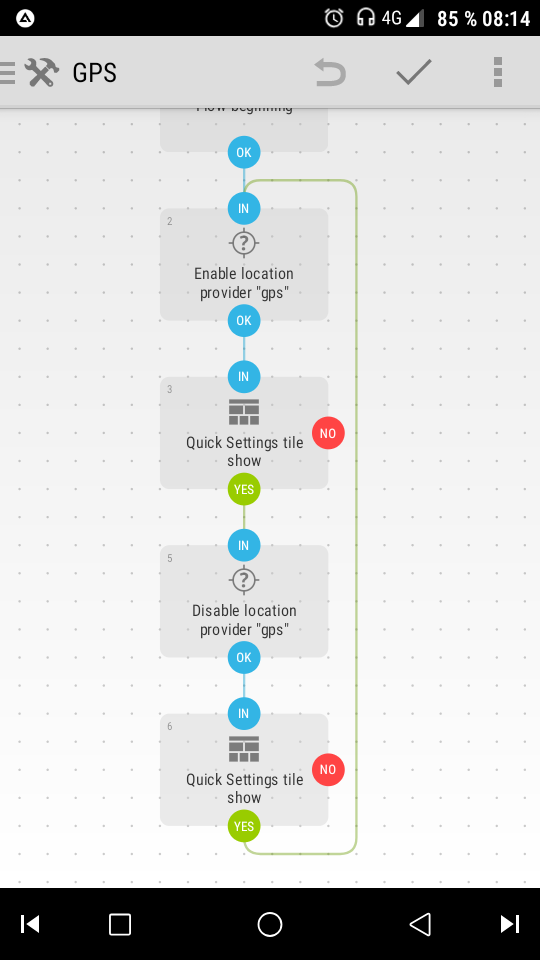 Not the answer you're looking for? Browse other questions tagged gps 9.0-pie quick-settings or ask your own question.

2
Does firmware affect GPS accuracy?
2
I need a way to trace GPS trails in the background
1
Nexus 6P GPS location inaccuracies
1
Is it beneficial to turn off GPS (or turn location to battery saving) in Marshmallow?
0
GPS issue when Mobile Data is enabled
1
Network mode switch quick settings tile
0
How to prevent an app's notification from updating while the screen is off?