what in xposed caused this bootloop and how to prevent it from happening again?

My android phone is stuck in a boot loop. To troubleshoot it I was able to boot into TWPR and use adb pull /sys/fs/pstore/console-ramoops to get some boot logs (is that even the right file?).

When opening the file in a text viewer it is very corrupted, with missing letters like in this example... 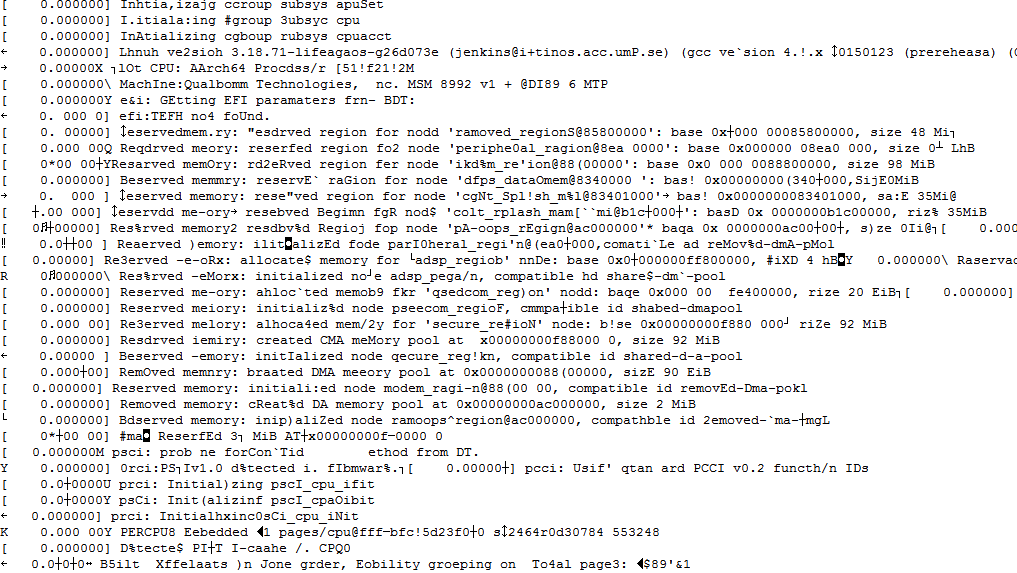 Is there another procedure I can follow to either get a correctly encoded or uncorrupted log file or fix the one I got? It was literally the only way I found of pulling some logs from TWRP terminal...

On the troubleshooting part: prior to last known good status no particular action was done... just using telegram briefly.

Then I started getting crashes of system app so I rebooted. This now is the result...

Update: it seems that adb connects during the boot animation. I was able to do adb logcat -v time -b events -b main -b system -b radio >> boot.log and i got a stream of logs, will post the result once it's done boot looping or battery dies.

Update: indeed I was able to get real-time log of the boot process. It is boot looping since my logfile is growing bigger, so it's not "stuck".

Trying to look for information in the log I found this pattern of "waited one second"... which seems to indicate that something is not running or failing to run.

Here is a screenshot of what I mean: 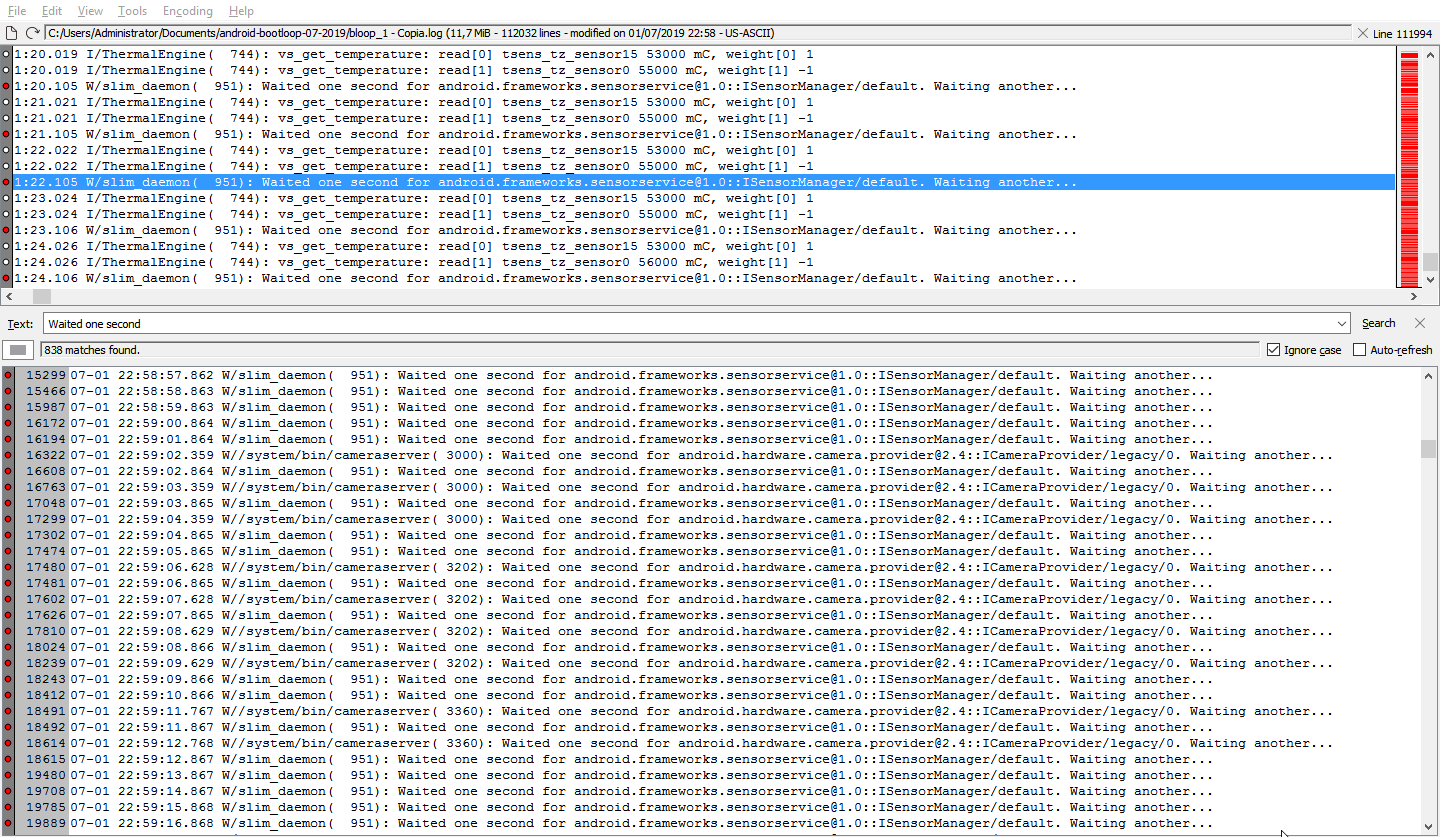 The figure of 838 seconds waited seems right since I had my phone logging for about 15 minutes...

I am continuing to log until something happen, but now I think I need some help debugging this problem...

There seem to be two things that are waited for:

My conclusion for now is that there may be something wrong with camera or sensors...

This seems to be readings for temperature.. 53° is pretty hot... 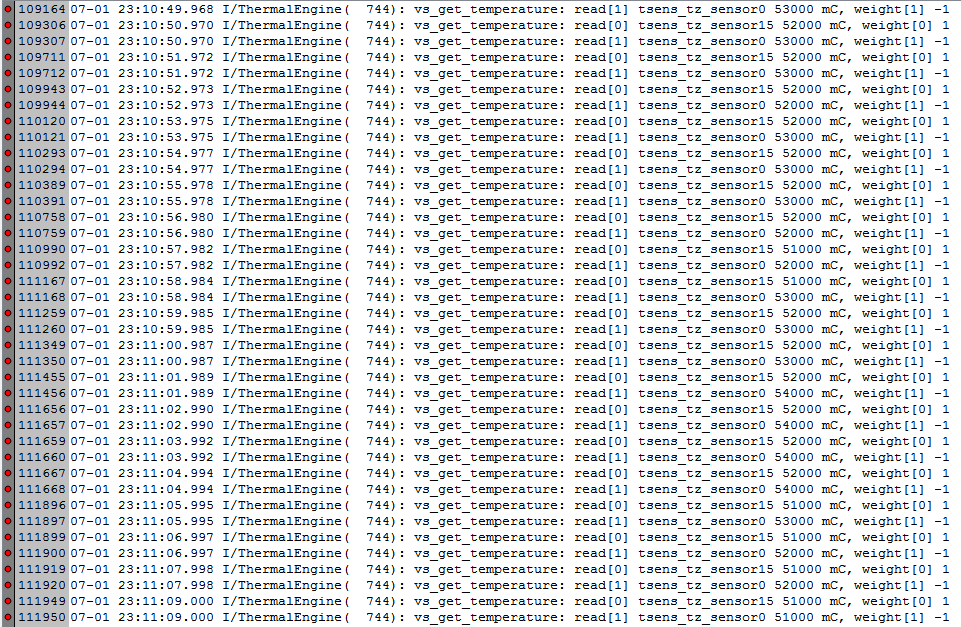 Also this seems to imply that the battery stats dumping took 262k milliseconds. (?)

I would attach the log file, but how can I clean any private data that may be in in there?

I was finally able to boot, disabling the Xposed module did the trick:

It booted in safe mode, since I previously had modified some files to induce that, so I rebooted again from power menu and it booted normally.

Now I think I want to know what happened specifically so that I can re-enable xposed, since I have some modules I rely on for customizations.

Also with no configuration changes I'm still baffled at how the phone got bootlooped, i remember frequent ANRs of the system app to the point of not able to run anythng and rebooting.

Is it really xposed fault or merely disabling it removed a symptom of something else ?

So the question should be what in xposed caused this bootloop and how to prevent it from happening again ?

Bootlooping with logs this messed up probably suggests that some other process is arbitrarily reading and writing from the io stream of the log file. In layman's terms, very bad stuff.

I think your best option is to just recover as much data as you can and reflash the ROM. Something has clearly gone very wrong.

2
What would cause the existence of a /sdcard/logfile.log?
2
Escalate privileges in ADB shell to fix build.prop permissions
1
Stuck in boot-loop (Broken partition / filesystem?)
0
Disable xposed from TWRP
0
Samsung J5 stuck in boot loop after factory reset