What are the alternative Android app markets?

How many competing Android markets (other than the Play Store itself) are there and are they any good? Which ones do you use and why?

I use AppBrain because it provides a nice site, and it makes it really easy to install apps onto my phone. Additionally, I'm finding that many bloggers that are reviewing apps are putting links to the AppBrain page for the app in their posts. This makes it really easy to mark something for install while I'm at my computer reading the blog posts, and then install it when I get a chance.

AppBrain offers an alternative (and much cleaner) interface to the Google Play Store, which offers several advantages:

For installation, you will be redirected to Google Play. In the past, AppBrain had a separate app for this called the "Fast Web Installer", but unfortunately this app was banned by Google. So even for batch updates, the Playstore app will now be opened for each app separately (not AppBrains fault). 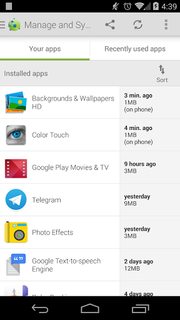 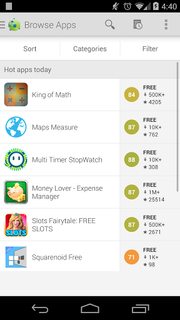 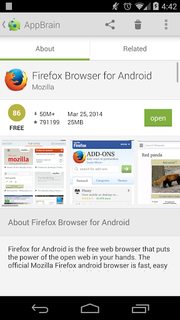 Still, I count their Website as a much better alternative to the Google Play website – and the same is to be said for their app, though for installations it has to redirect you as described above.

There are actually several alternatives to the 'official' Google Android market (aka Play Store).

I personally like to search for new apps from my PC browser, and a bit less from my phone. Most (all?) of the markets nowadays offer both, via a dedicated phone-app that you'll have to install, except from the official one which is already there.

Until, well, yesterday, the 'official' market would not have been available from your PC (meaning: on a PC web browser). Now it is, with a neat push-to-your-phone one-click installation that is taking away one of the advantages of the competition (see AppBrain). The alternative markets, though, have still their peculiarities. I'll make a short summary but don't expect it to highlight all of the differences. Some markets (e.g. AndSpot) do not offer very specific features to users, but try to gather developers by offering advanced features such as easy stats.

I suggest you click on some of these links and see for yourself if the look/applications suit your style!

Thanks to various sources, in particular, this thenextweb.com article

I've been using F-Droid, which is a smallish repository focused on free and open source tools. Not all encompassing by any means but one of the few that is explicit about showing you the license before you download an app.

F-Droid is a small, but superb alternative to Google Play. Though it offers only about 1.200 apps1 in its main repository, they are mostly high quality. In comparision, these are some advantages it has over the Playstore: 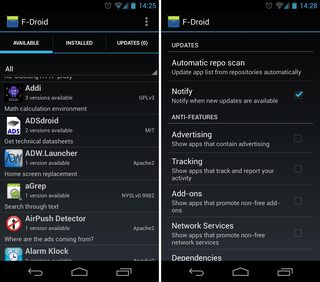 More details on F-Droid can also be found at Wikipedia. Interesting fact: F-Droid is a fork of Aptoide3.

SlideME, this is very handy when you want to buy stuff in countries without paid Market. (actually you mention it in your question. I posted this answer just for the sake of completeness)

Don't forget about GetJAR. :-) This market got its first big break when Rovio announced Angry Birds would be exclusive to them when it first launched.

Aptoide serves a bunch of repositories in APT style (which some of you might know from Debian and its derivates). They also have their own Android client used to access (search and install apps from) them. For checking available apps, any web browser can be used as well – simply point it to m.aptoide.com. According to Wikipedia, they serve more than 900,000 different apps with over 3.6 billion downloads in over 250,000 stores (as of 5/2017). 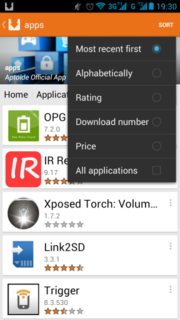 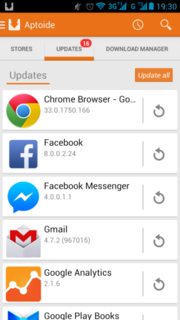 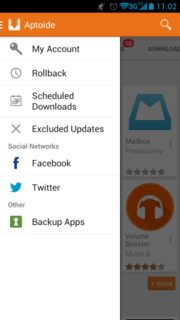 Often associated with black markets and other "unsafe sources", that's not what it is by default (like peer-to-peer exchanges are not, and like Youtube isn't – though you easily can find "pirated content" there). Paulo Trezentos, co-founder of Aptoide, kindly pointed out several details behind Aptoide in his answer on How safe is it to use Aptoide? And even more in a mail he sent to me. Some core-points:

In his mail to me, Paulo concluded: Believe we still can do better. Which to me indicates they don't settle on what they have achieved, but try to continually improve. If you additionally consider there's a company behind the "stores" which recently even filed an antitrust complaint against Google, that should be sufficient to deviate from associating Aptoide with "black markets" and "piracy" any more than Youtube – but rather consider it a good alternative (or supplement) to other Android app markets.

There are some more advantages worth mentioning:

Try that with Google Play :) 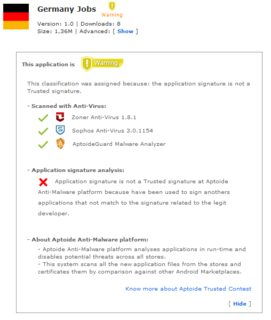 A couple of things to see here:

The Samsung app store is installed on every Samsung mobile device (which is a lot). They are ultra helpful, unlike every other app store I have submitted to.

It can take over a week to get a new app past their quality control but it's worth the wait. They are so good at reviewing apps that I now submit to Samsung before Google Play.

It can be a little confusing at first to understand what they call their seller office is all about but hey, we are developers so are used to learning curves.

Among other things they review content to ensure that there are no copyright issues (something that can get you banned from Google Play) and they review every option VERY thoroughly on ALL the devices you have selected.

If anything goes wrong and quality control fails you get a complete breakdown of exactly what went wrong (including log cat) and even a video replicating the issue and they provide details on what is expected from you to fix it and re-submit.

What really impresses me is that they are so constructive with their criticisms.

Once an app has been approved by Samsung, I am more than happy that I have a very solid app that functions the way I want it to.

I just get a comfortable feeling when Samsung approves one of my apps. They don't tell you off or slap you on the wrists or, in any other way treat you like a naughty school kid if you get something wrong. They just help you to understand what to put right. Google Play will just pull your app and suspend you with no help whatsoever to put things right.

By default Yalp Store connects to Google services using a built-in account, so you do not have to own a Google account to use it . The only reason to use a live Google account is to access the paid apps you own or leave reviews. 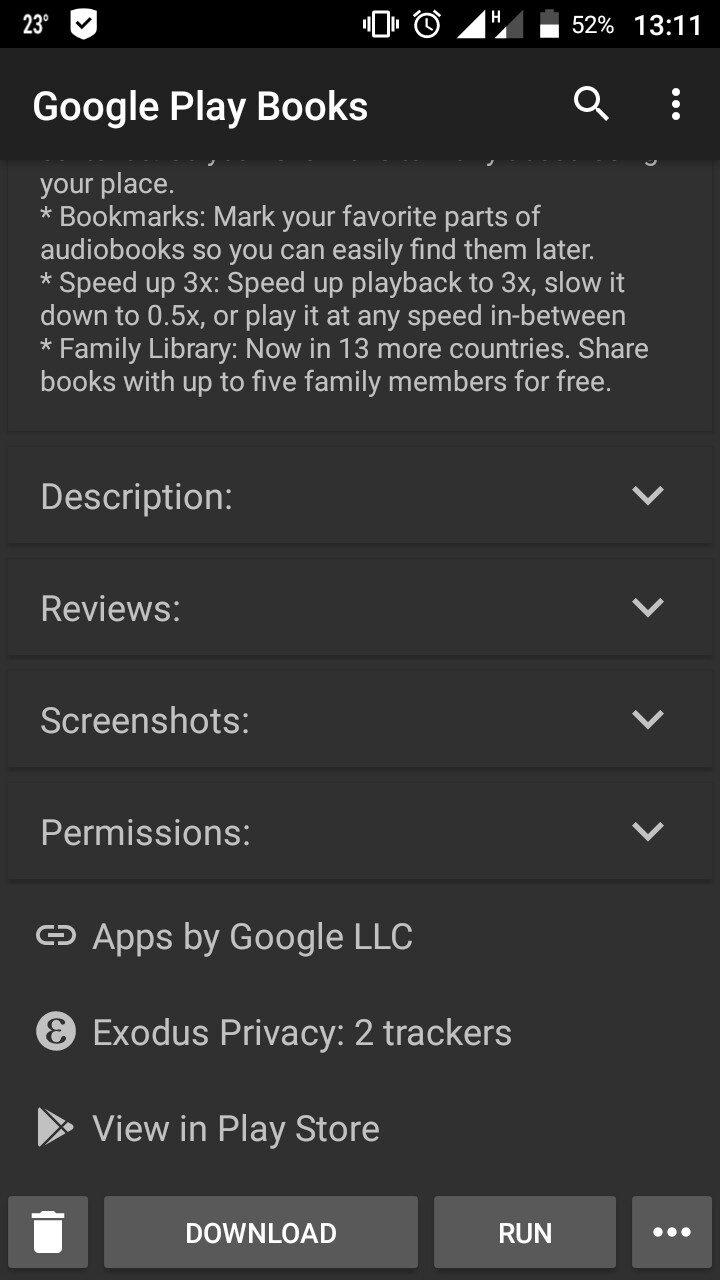 Missing in previous answers is AndroidPIT which is running a separate market. Sure, almost all apps found there are also in the Playstore (but not necessarily vice-versa: so for missing apps there are links to the playstore provided). Developers need to actively maintain their apps on this platform (i.e. upload new versions), and for paid apps AndroidPIT provides its own license API.

So what is the plus of this platform? It has an active community (in the forums and the news blogs), and one can use alternative payment methods (e.g. Paypal) in addition to credit cards. Moreover, reviews for apps can be found there as well. So with the playstore comments, local comments, and the reviews, one can get a better idea of what an app is like -- before downloading it. Furthermore, the German branch even has an App Reviews section in their forum, including overviews for apps on a kind of "per-category" base -- which makes it easier to find a suiting app, as similar apps are grouped together.

So if you like that idea, but do not want another "source of apps" (it's a good idea to stick to one market platform, especially for paid apps -- so you don't lose track which app you installed from what source, and get into trouble on a re-install for a new (or factory-reset) device), you can still go there for information.

UPDATE: AndroidPIT has closed its independent app market on 2014-12-31.

The Opera (as in web browser) mobile store (now Bemobi Mobile Store) has many Android Applications that are arranged by category.

Now Google is focusing on the educational side, offering a special version of its app store called Google Play for Education. (Initially applicable to USA only I believe).

It makes it easier for educators to find apps, books, videos, and other content appropriate for K-12 students, enables bulk purchasing and the ability to distribute apps to a group of students’ tablets wirelessly.

At launch, Google is offering Play for Education bundled with Google Nexus 7 tablets. In early 2014 the company plans to offer Asus Transformer Pad and HP Slate 8 Pro tablets as well.

Teachers can find apps by grade level, subject, or other criteria, and content can be paid for using a purchase order.

Though it's rather a "link only answer", in this case there's no way around as the given source is (hopefully) maintained and the content subject to change: Here's a list of available markets in the DMOZ Mozilla directory, also giving users the possibility to report issues with them (if any). In addition to those already mentioned in answers here, it also names e.g. Aptoide, AOpenSource – altogether at the moment of this writing 25 Android markets.

Aurora Store is an open source fork of Yalp Store which provides a Material UI to the later.

Aurora Store is an UnOfficial FOSS client to Google's Play Store, with an elegant design, using Aurora you can download apps, update existing apps, search for apps, get details about in-app trackers and much more.
You can also Spoof your Device Information, Language and Region to get access to the apps that are not yet available or restricted in your Country | Device.
Aurora Store does not require Google's Proprietary Framework to operate, it works perfectly fine with or without GooglePlayService or MicroG. Thereby avoiding the various privacy issues.

Also, my revenue was ramped up too within 2 days. If you are looking for targeted users for your app, then you should distribute your app to many sources, not just stick to one website!

17
Alternatives to the Android Market
0
What are the official APKs sites?
-2
Cruz T301: Where Can I Get New Apps?
0
Is there a shop like Cydia on iOS for Android?
0
How to install the play store applications not available in my country
86
How can I download an APK file from the Play Store?
40
How safe is it to use Aptoide?
23
Can I install apps on phone without using the Android Market?
26
How can I get apps from the Amazon app store from an unsupported region?
22
How to delete an app installed with Amazon Appstore?
See more linked questions

1
Are alternative, mostly Asian, Android Markets safe and fair?
4
What are potential problems/violations that malware apps can do?
6
How can I prevent an app being uninstalled from the Play Store?
1
Possible to estimate the number of users for an Android app?
2
How to make alternative app markets perform automatic updates?
1
Why are apps on Aptoide newer than the Play Store?