Does my screen have burn in or is it something else?

My Samsung Galaxy S7 appears to have burn in, just like in this image: 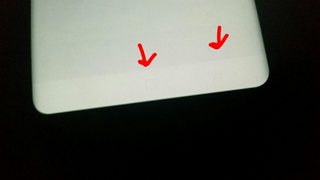 (Not my phone. Image from Android Authority)

The difference is that no matter how hard I look, I can't see any icons or any other irregularities in the white bar. It appears to be perfectly uniform. It's exactly where my notification bar is in portrait mode, but I use my phone in landscape mode a lot too, and there is no colour/brightness difference at the side.

Also, the white bar is brighter than the remainder of the screen: I would expect burn in to make it duller.

What is causing this?

Most likely you are right, your display is affected by a burn-in effect.

The Galaxy S7 is equipped with an OLED display, this means that every small pixel is a small LED based on organic chemicals that can be individually lit.

The problem of OLED displays is that the longer and more often a pixel is lit, the pixel is aging and getting very slowly darker and darker.

Based the screen shot I would agree with you that this was caused by the Android task bar which is usually black (not lit pixels means no aging) whereas the rest of the screen above the task bar is usually not black and therefore is affected by the aging effect.

May be you often accidentally activate the screen when the phone is in your pocket (and therefore in portrait mode)?

Usually modern OLED displays should have implemented counter measures to reduce the effect that different parts of the screen are aging in different speed. However it looks like in your case this mechanism wasn't able to fully compensate this effect.

What you can do: The pixels aged pixels that have lost a bit of brightness can't be restored. Therefore the only way is to force the remaining usually black pixels and increase their aging. This can be done by displaying an image that have all pixels black except for the area that is brighter (the area below the red arrows on your image). If you display this image on your screen for some hours a day you will see that the pixels will slowly will adapt their brightness to the pixels on the rest of the screen.

Not the answer you're looking for? Browse other questions tagged screen samsung-galaxy-s7 .

8
How to turn off screen without affecting anything else?
6
Daydreaming -- does it decrease screen life?
2
Screen Distortion After Using Certain Chargers
1
Is there a way to have phone screen display more contents?
0
my phone froze over night (i have a galaxy s7) and is on a black screen
1
Can Always-On Display on my Galaxy A5 (2017) cause screen burn-in?
1
Help fixing odd AMOLED screen burn
3
Is it possible to get a part of the screen by adb or anything else?
1
Minimal way to always have screen on on Android?